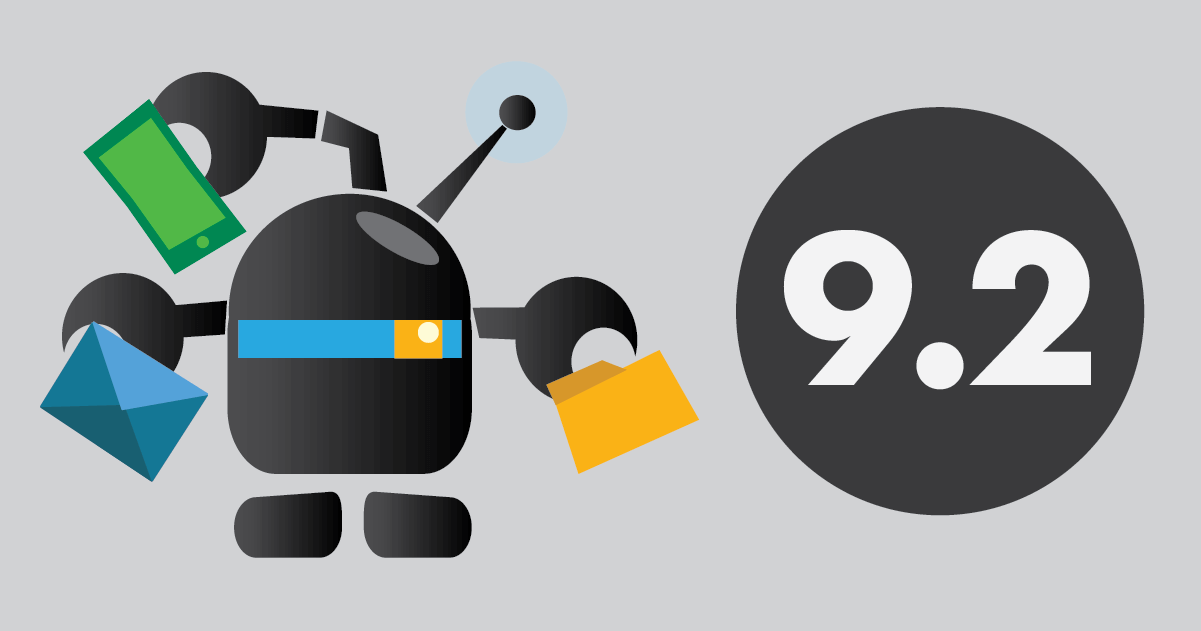 Cerb (9.2) is a feature upgrade released on March 07, 2019. It includes more than 118 new features and improvements from community feedback.

To check if you qualify for this release as a free update, view Setup » Configure » License. If your software updates expire on or after February 28, 2019 then you can upgrade without renewing your license. Cerb Cloud subscribers will be upgraded automatically.

The main limitation of packages has been that only administrators can use them. Many teams have asked for a way to more broadly use packages to automate workflows that involve the creation of records.

A new package library feature addresses this feedback by allowing workers to make selections from a list of pre-approved templates that are curated by administrators. We’ve provided many useful defaults, and admins can add new packages based on the specific needs of their team.

The package library is organized into sections (i.e. extension points) that determine where specific packages are available – when creating a new project board, adding widgets to a dashboard, etc.

Packages can save a lot of time by creating multiple related records at once. For example, when creating a new project board in one-click using the ‘Kanban’ template, a board is created with three columns (TODO, In Progress, and Completed), along with the automation to close tasks when moved into the completed column. Previously, all of these elements had to be created and configured individually.

Packages in the library may also contain prompts that gather input from workers to customize each use – targeting a specific worker, providing a name, selecting a date range, etc.

The library drastically simplifies some workflows that are currently being done with bot interactions. For instance, creating a chain of related tasks on a ticket as a single action. These options are now available in the standard (+) popup editor when creating records.

Administrators can manage the package library from Setup » Packages » Library or from Search » Packages.

The packages library is available when creating bot behaviors.

The packages library is available when adding actions to bot behaviors.

The packages library is available when adding decisions to bot behaviors.

The packages library is available when adding loops to bot behaviors.

The packages library is available when creating calendars.

The packages library is available when creating connected services. This makes it much easier to set up new services. Previously, connected service packages had to be copied and imported from the project website. Now integrations like Twilio and Amazon Web Services can be configured in a single click.

The following services can be quickly configured from the library: 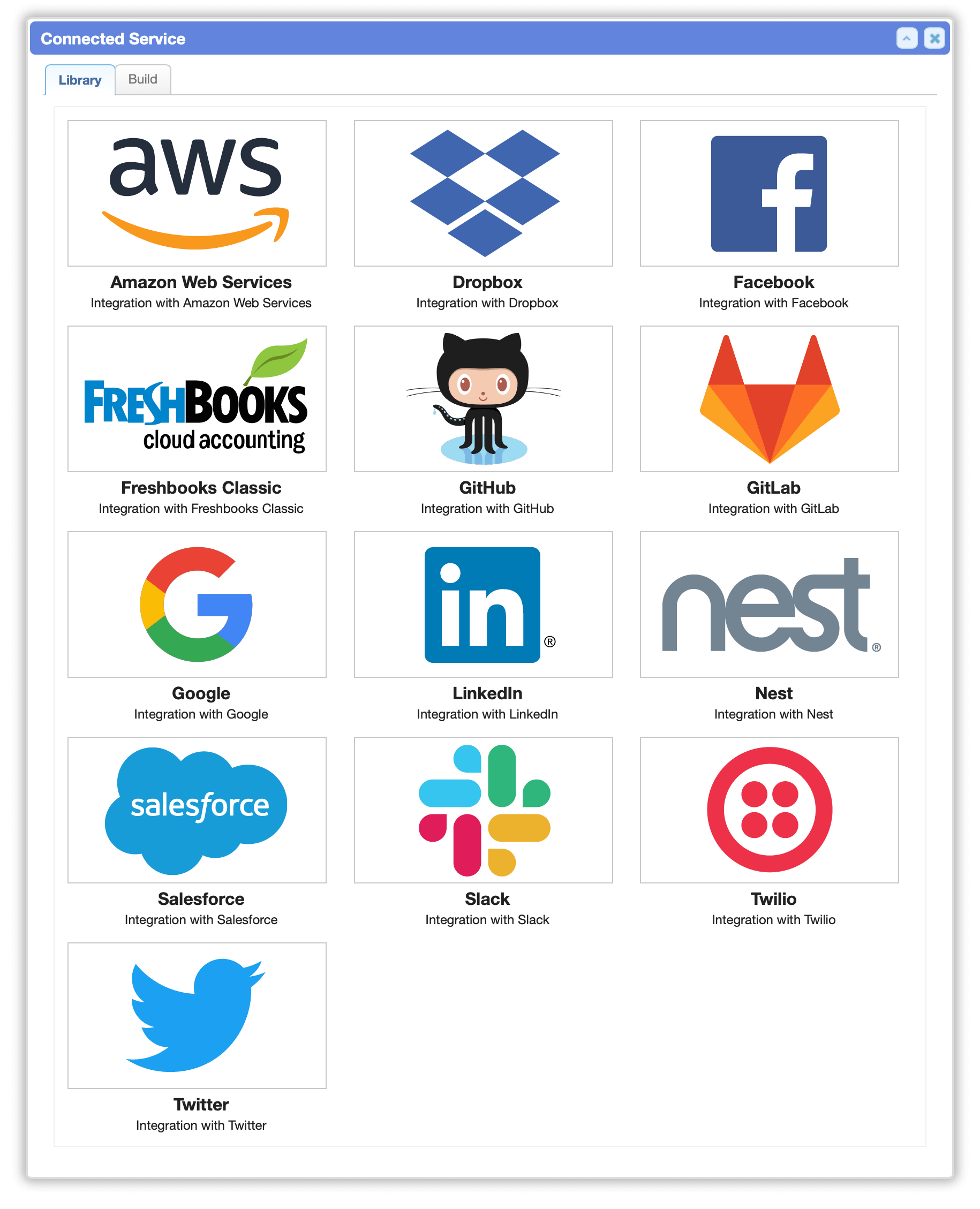 The packages library is available when creating profile tabs.

The packages library is available when adding profile widgets.

The packages library is available when creating project boards.

The packages library is available when creating tasks.

The packages library is available when creating workspace pages.

Removed the ‘Help me create a page’ option when creating workspace pages. These same options are now available in the library (e.g. Home, Mail, Reports).

The packages library is available when creating workspace tabs.

The packages library is available when creating workspace widgets.

For instance, an “Administrator” role may define membership as isAdmin:yes, and its roster will automatically update to always include every worker with administrator privileges. Previously workers had to be assigned to roles manually. The members of a role are granted its privileges. 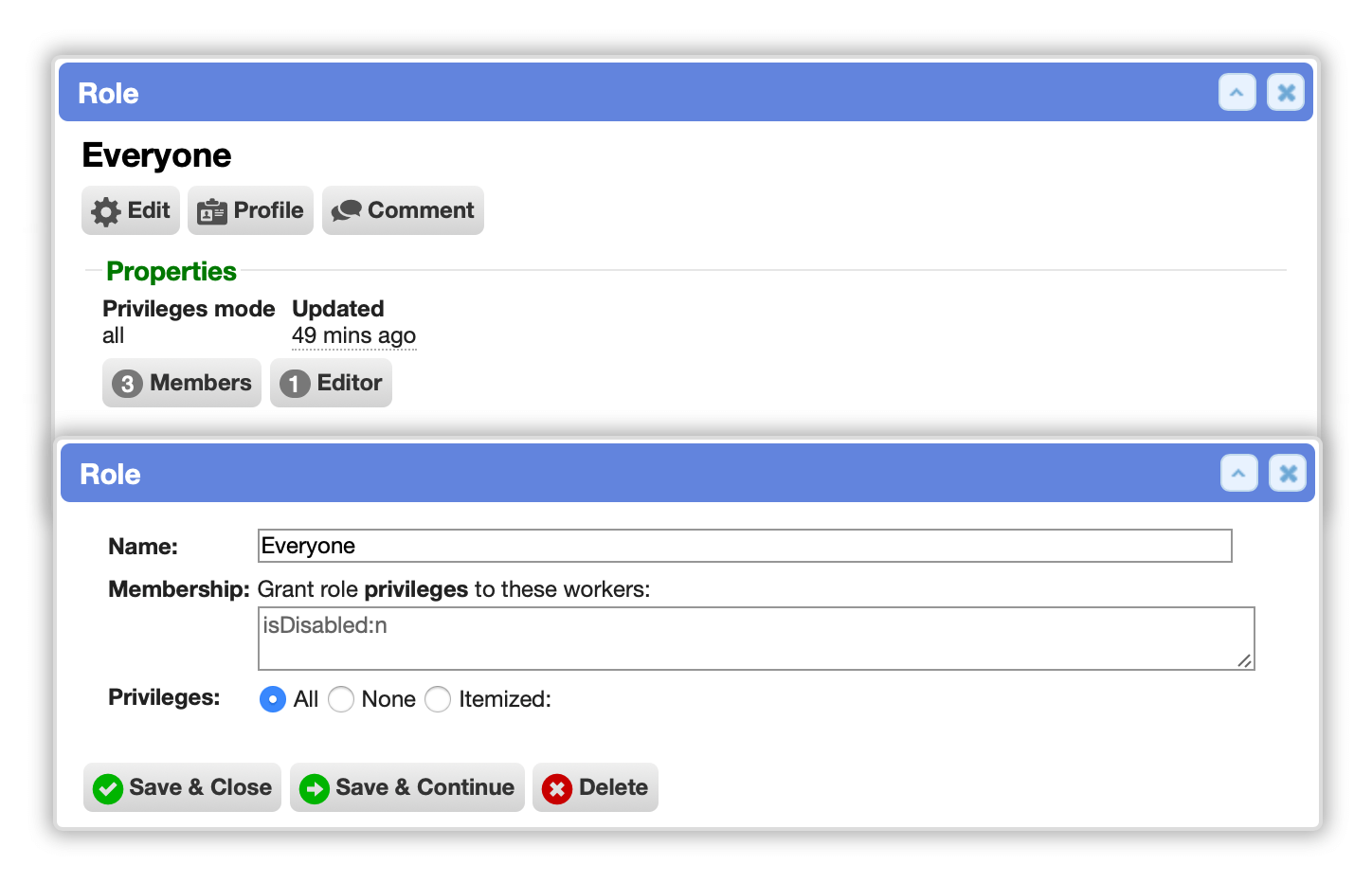 Roles are now much more flexible about who can view and edit their owned records. [#883]

Previously, role-owned records were readable by all members of the role and editable only by admins. This left groups as the only way to share edit privileges on a record.

Now, when creating or editing a role, two new options are available for “Records owned by this role are visible to these workers” and “Records owned by this role can be edited by these workers”. Like the membership improvement, these options provide a search query to determine which workers may view or edit the role’s records. The editors and users of role-owned content are no longer required to members of that role. 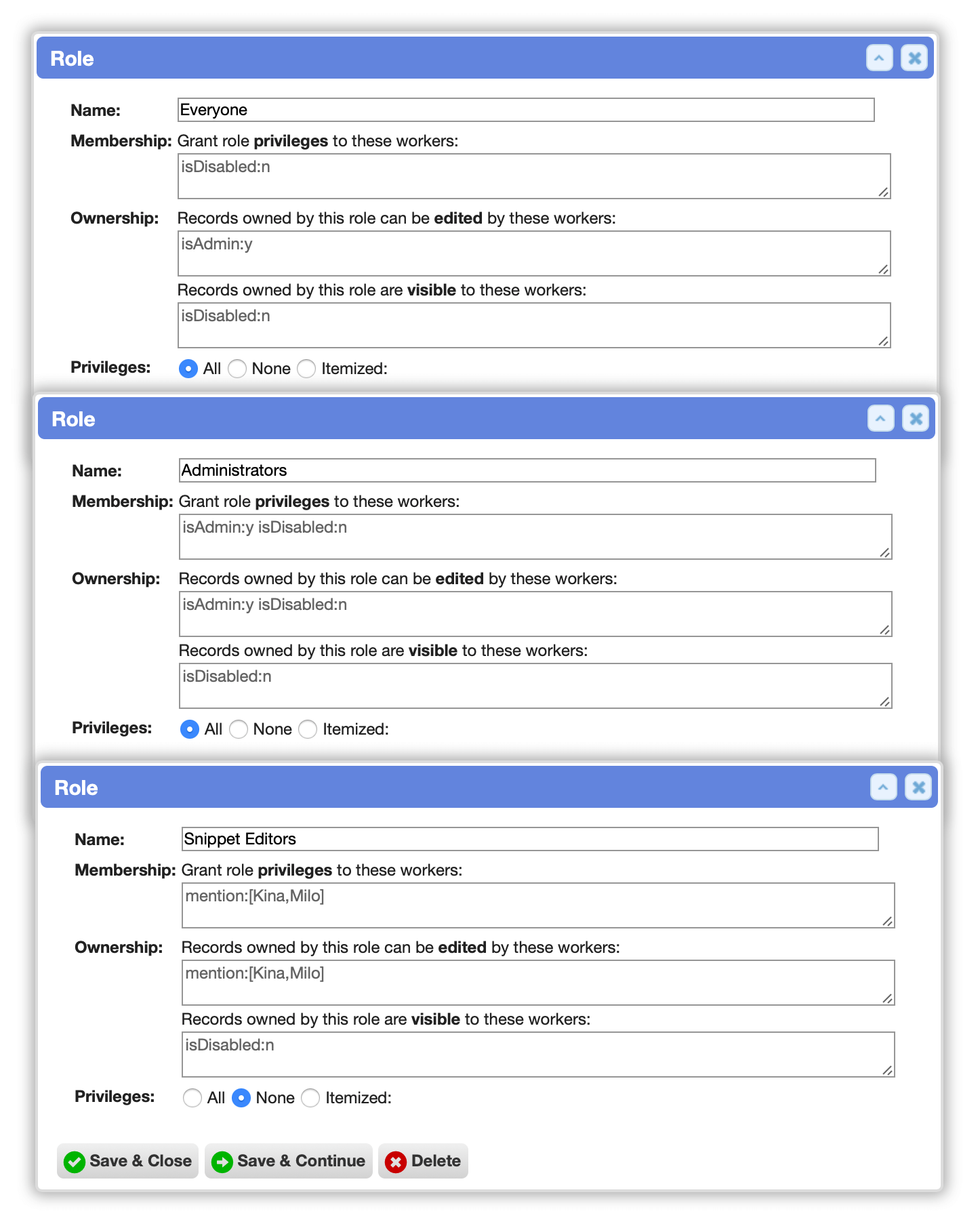 On worker worklists, new role.editor: and role.reader: deep-search filters make it easy to segment workers by the ability to respectively edit or use role-owned records.

On role worklists, there are new deep-search filters for member:, editor:, and reader:. These find roles with matching workers who are granted role privileges (members), able to edit role-owned records (editors), or able to read/use role-owned records (readers).

Added profile pictures to role records. These are displayed on cards, worklists, and profile pages.

Owners are displayed on workspace pages

Workspaces now display their owner in the top right of the page. Clicking on that name opens their card. For roles, this makes it easy to see who the editors are.

On ‘Chart: Categories’ dashboard widgets using a worklist.subtotals data query, clicking on a bar segment will open a search worklist automatically filtered to the underlying records.

On ‘Chart: Pie’ dashboard widgets using a worklist.subtotals data query, clicking on a segment or legend label will open a search worklist automatically filtered to the underlying records. [#896]

Fixed an issue with dashboards where ‘Categories’ widgets didn’t load properly when opened in a new background tab in the browser. [#731]

Added a “[UI] Record editor opened” event to bot behaviors. This allows custom client-side functionality on record editor popups. For instance, based on an actor or record fields, a set of custom fieldsets can be automatically linked to the record being edited. Certain fields may be hidden and default values may be overriden. [#759]

Added an optional uri field to bot behaviors. This provides a more portable alternative to using IDs when referencing behaviors.

This is primarily used by custom widgets on dashboard and profiles.

Packages now support a ‘picklist’ prompt type, which allows the user to select from a pre-defined list of options. 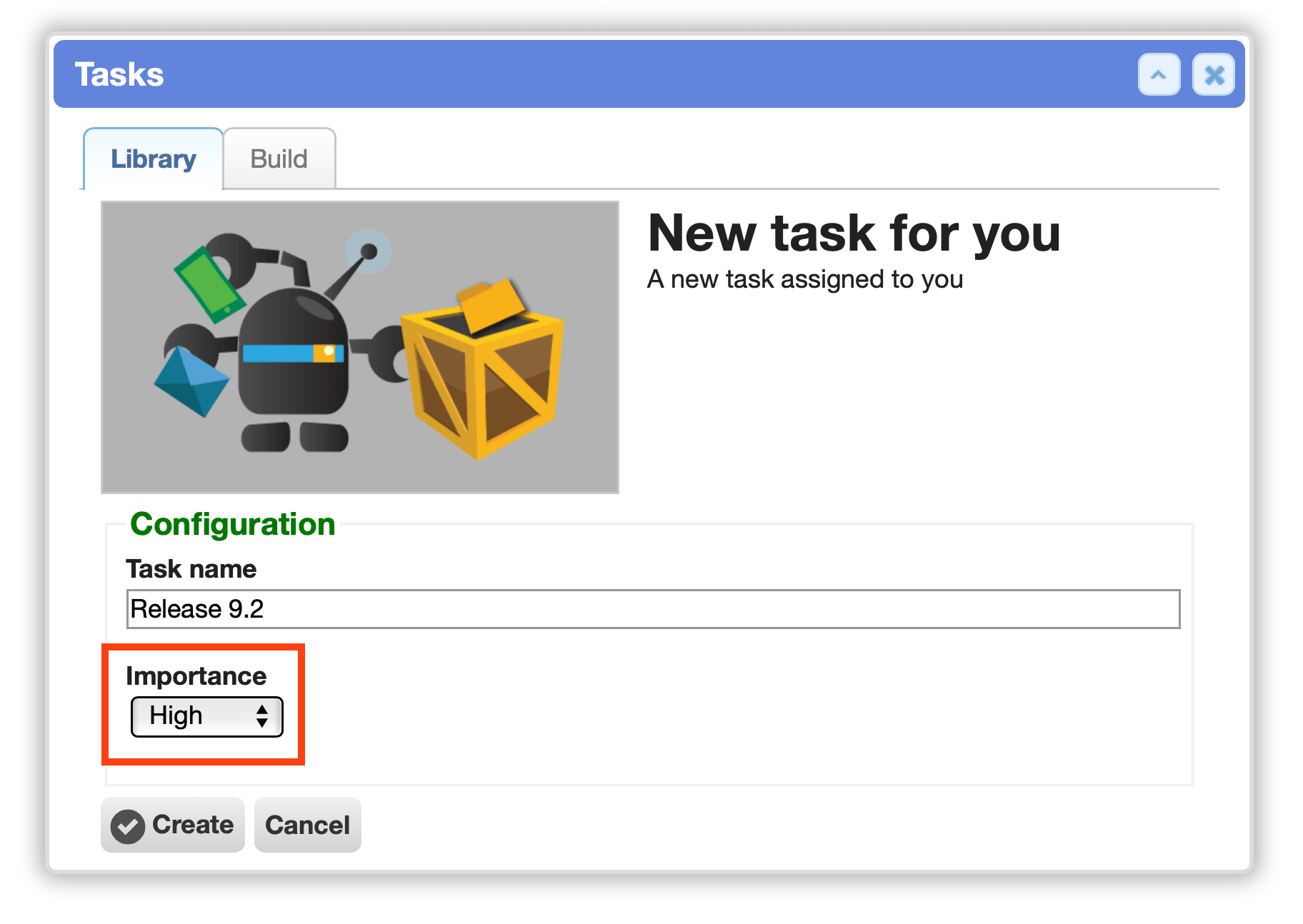 In packages, records can now include an _exclude key with a dynamic value based on prompts and scripting. A value of true will skip the record when importing package contents.

This allows some package members to be optional. A package may select one of several alternative implementations based on prompted input.

This is used by dashboard widgets in the package library to provide a picklist of ‘Dataset:’ options, which are implemented as a set of widgets from which only one is selected.

In packages, behavior nodes (e.g. decision, action, loop) can be added to an existing behavior. Previously, it was only possible to add entire behaviors.

In packages, the bot_id of a behaviors record can now be specified using placeholders.

Packages now have their own menu in Setup » Packages. This includes the packages library and the ability to import arbitrary packages (previously Setup » Configure » Import Package).

On project boards, a built-in action is now available for automatically changing task statuses (e.g. completed) when cards are dropped on the column. Previously this very common workflow had to be implemented using bot behaviors, which added unnecessary complexity. 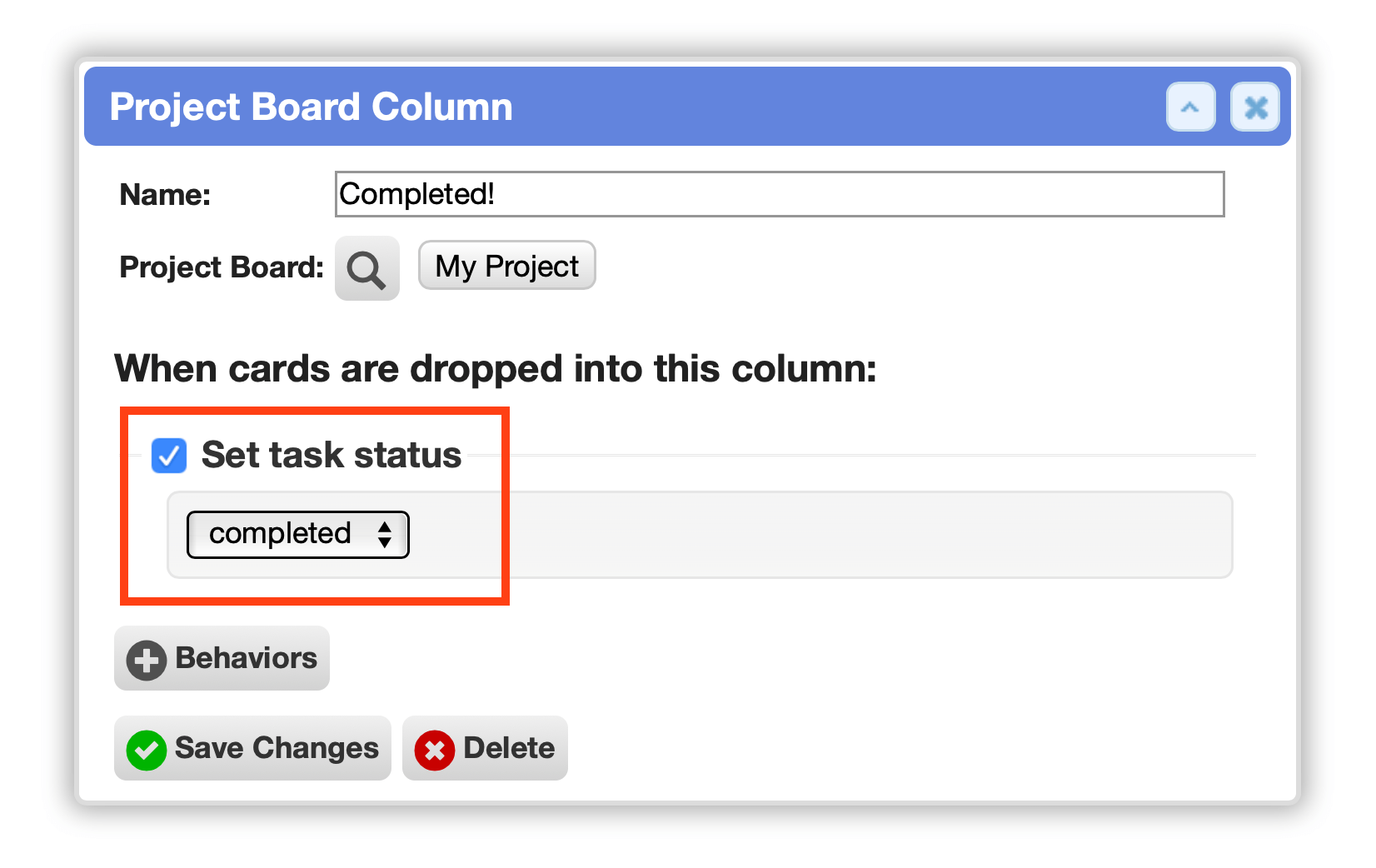 Cerb now uses ‘utf8mb4’ (4-byte UTF-8) encoding for the database connection. This is backwards compatible with the 3-byte ‘utf8’ encoding we’ve used historically, while allowing us to begin transitioning the schema and data to full support for the full UTF-8 range (Emoji, Chinese, etc).

On all record fields that don’t currently support 4-byte Emoji characters (i.e utf8mb4), such characters will now be automatically filtered from input (browser, bots, API) rather than generating an error or refusing to save.

Arbitrary sizes in the image editor

The image editor on records can now specify arbitrary dimensions. Previously this was fixed to 100x100 pixels.

When editing records from card popups, the ‘Save Changes’ button now shows a spinner icon while in progress. The save button is also disabled to prevent accidental double-clicks.

In the records API, every record type that supports custom fieldsets may include a ‘fieldsets’ key with a JSON array or comma-separated list of fieldset IDs. This allows custom fieldsets to be linked to a record before any values are set.

Improved the performance of retrieving multiple records by IDs by reducing extraneous database queries when a server-side cache exists (e.g. workers, groups). This is frequently used in bot behaviors, data queries, dashboard widgets, and the API.

In data queries of type:worklist.subtotals, it’s now possible to subtotal by: using date-based custom fields with histograms like by:[dateCustomField@month]. Previously these always grouped by the exact timestamp (in seconds).

With worklist.subtotals data queries, worker records can now be subtotaled by group. This makes it possible to create widgets like a groups roster.

Added a sample.geo.points data query type for generating format:geojson output. This is necessary for demonstrating map widgets because there aren’t any core record types with a coordinates field. The input is a set of series.<alias>:() that contain a list of keys like new_york:(name:"New York" coordinates:"POINT(-73.935242 40.73061)"). The coordinates: key is required (long/lat order), but the other keys are arbitrary and passed through to hover/click events.

Data queries of type worklist.subtotals now return series metadata in the response for all format: options. This generates a query field for each data point which can be used to quickly run searches from dashboards, bots, or the API.