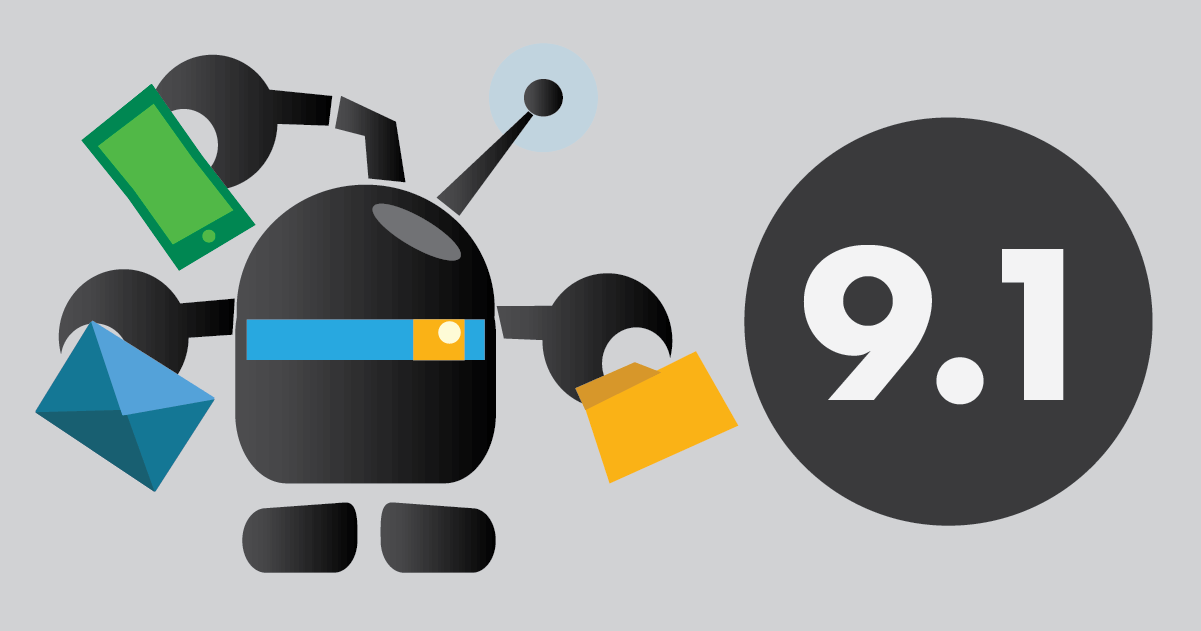 Cerb (9.1) is a feature upgrade released on December 26, 2018. It includes more than 73 new features and improvements from community feedback.

To check if you qualify for this release as a free update, view Setup » Configure » License. If your software updates expire on or after December 15, 2018 then you can upgrade without renewing your license. Cerb Cloud subscribers will be upgraded automatically. 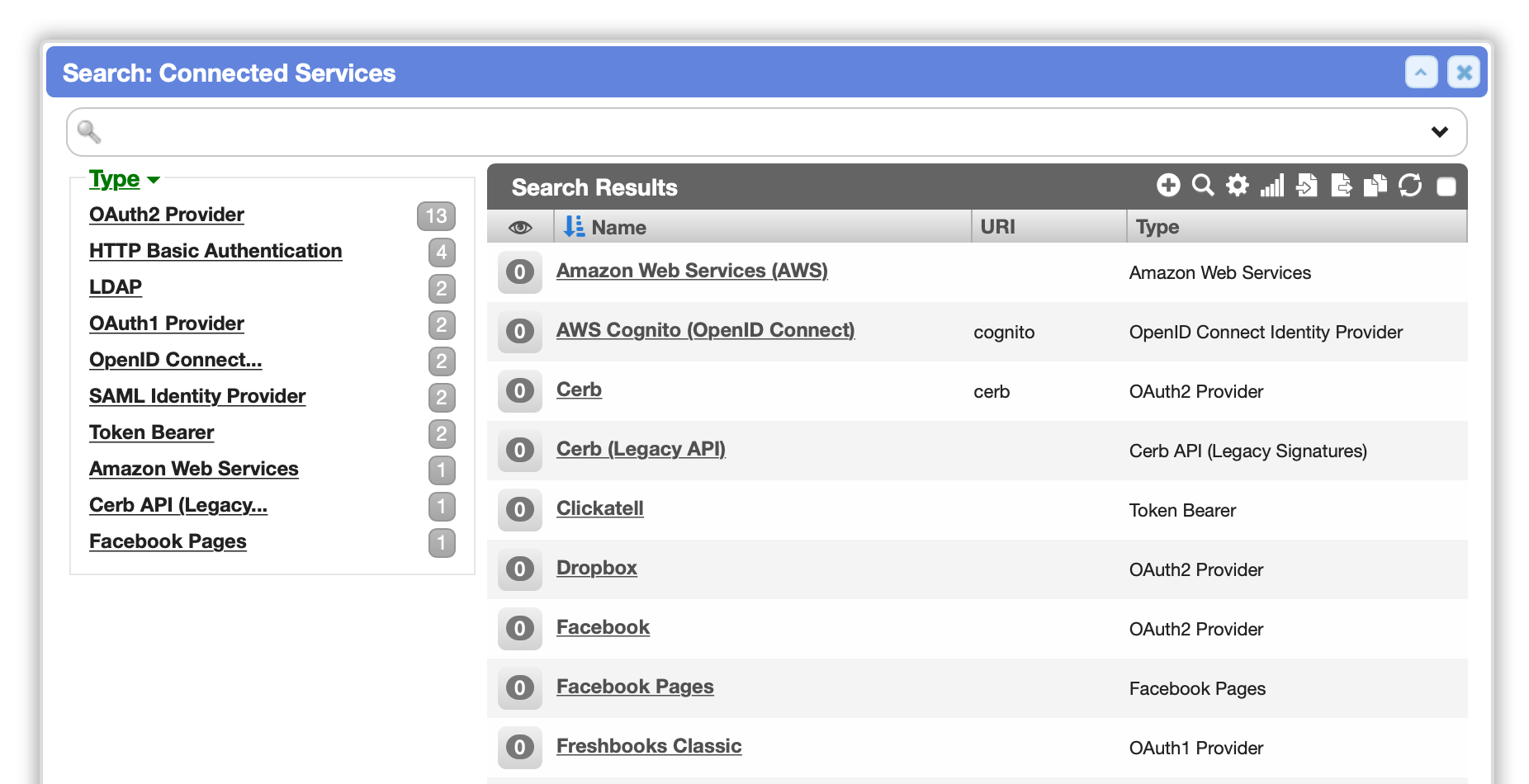 This was simple to use, but it led to several disadvantages:

Now, each connected account has a service provider as a distinct parent record. This cleanly allows multiple integrations with the same service, and new services can be added entirely through the browser without the use of plugins. Certain services, like identity providers, can be used directly as connected services and don’t show up when creating connected accounts.

Service providers themselves are based on reusable “types” to minimize the need for future plugins. For instance, you can now integrate with any OAuth-based service by picking that type and providing a few details. You have full control of the “scopes” that your bot behavior will request when connected accounts are created for that service. We can share connected service records as importable packages rather than plugins.

This improvement has allowed us to retire many plugins. Their data/functionality has automatically been migrated to connected service records.

The Facebook Pages service provider enables connected accounts to use a time-limited Page token for API authentication while automatically refreshing the token from an existing Facebook connected account. This removes the need to refresh each page token separately.

The HTTP Basic Authentication service provider enables connected accounts to use HTTP Basic authentication for any external API (e.g. Twilio, Stripe, JIRA). This secures the username and password rather than including them directly in bot behaviors. 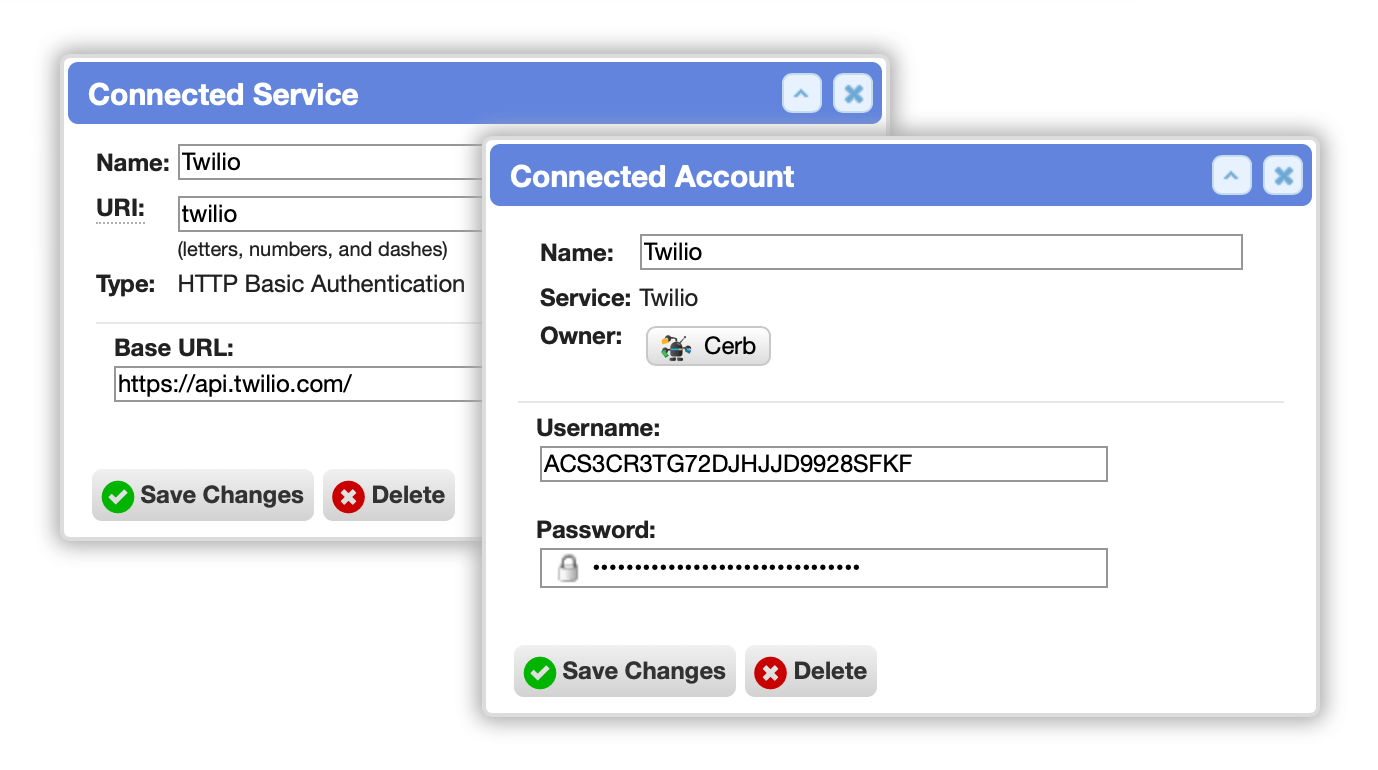 The LDAP service provider enables workers to log in using authentication details from a corporate directory. This functionality is now built in and the LDAP plugin has been retired. Existing LDAP configurations are automatically migrated to new connected service records. 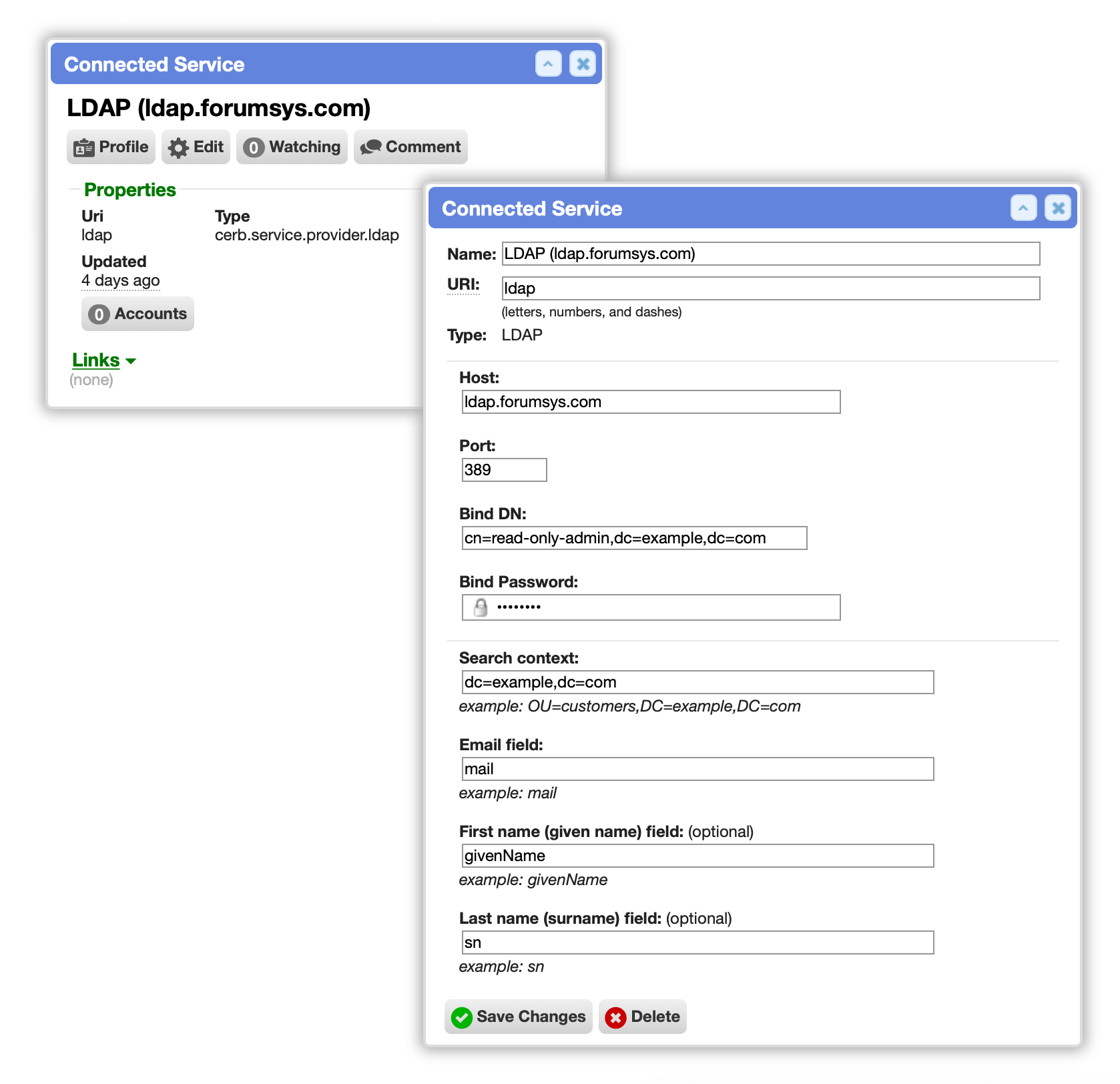 The OAuth1 service provider enables connected accounts to use OAuth 1.0a to authenticate against any external API (e.g. Twitter, Freshbooks). 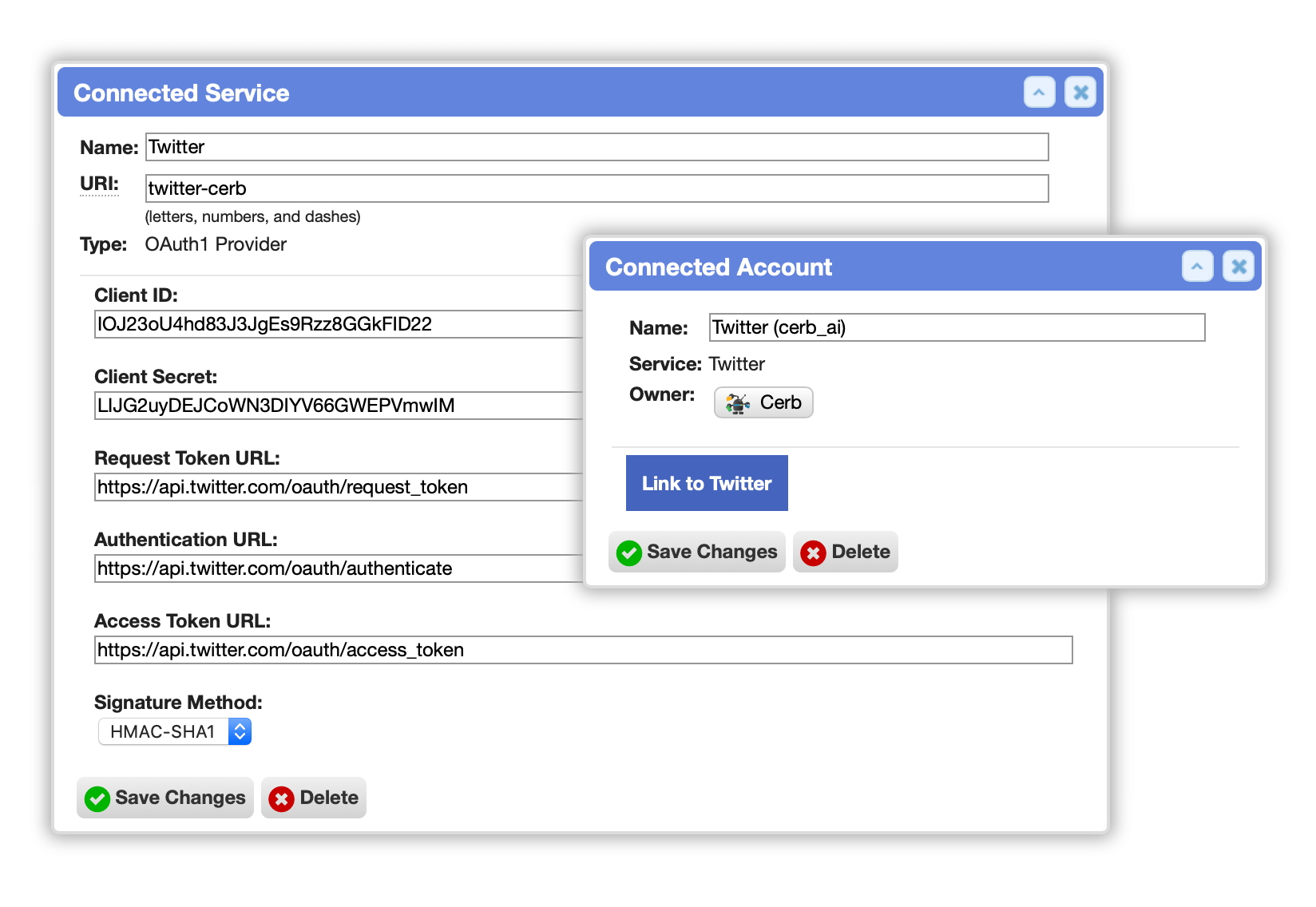 The OAuth2 service provider enables connected accounts to use OAuth2 to authenticate against any external API (e.g. Slack, GitHub). [#309] 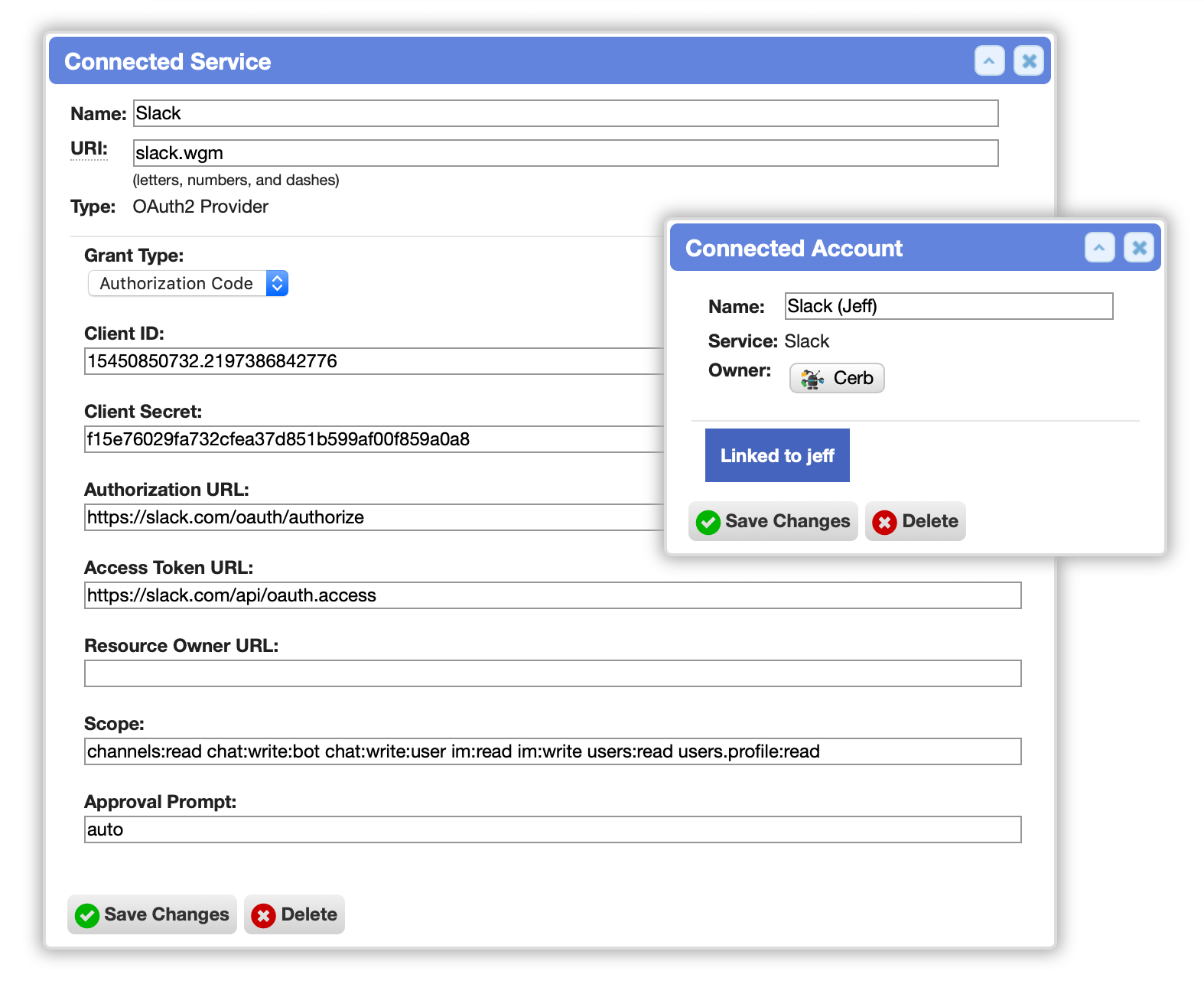 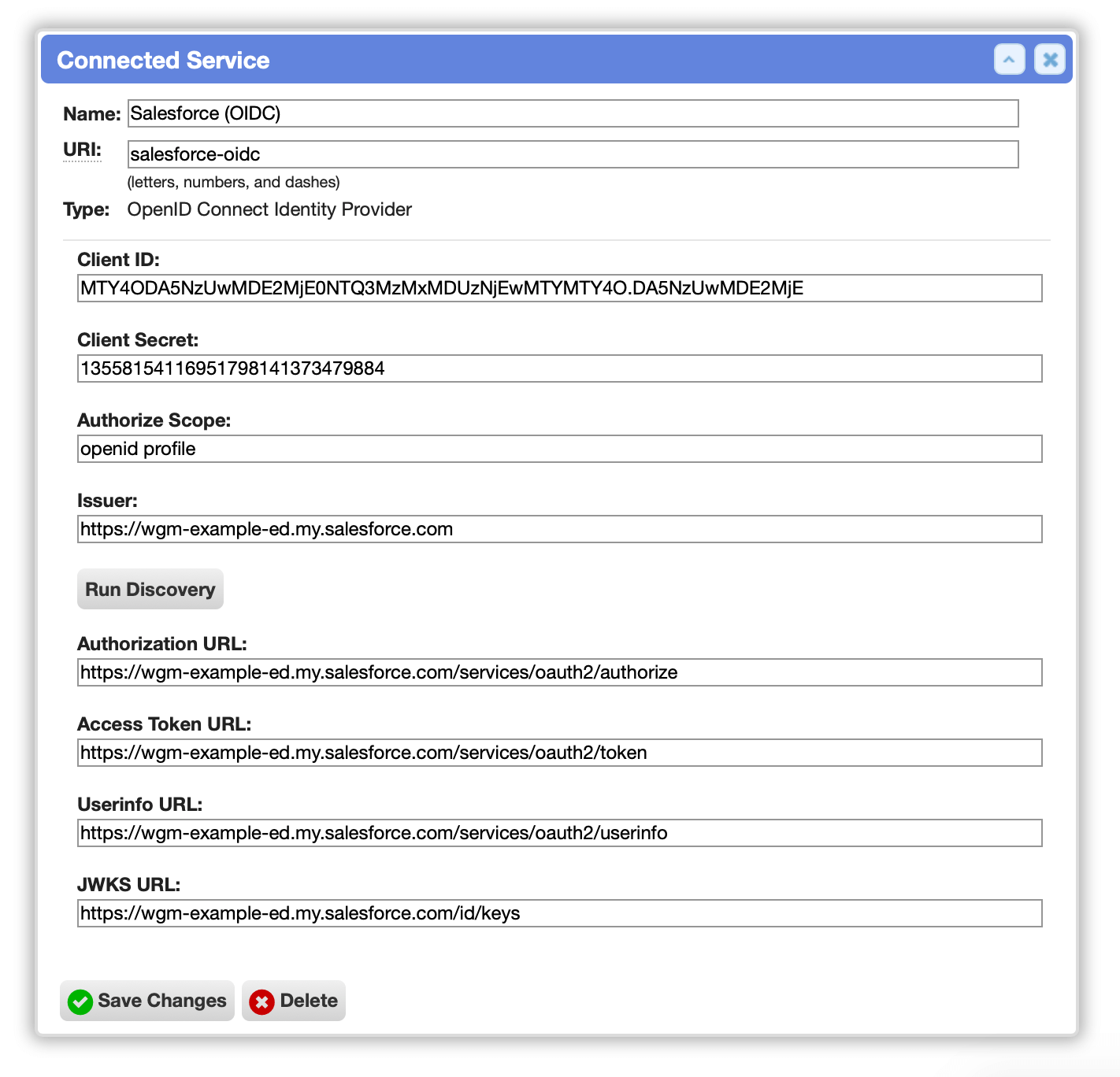 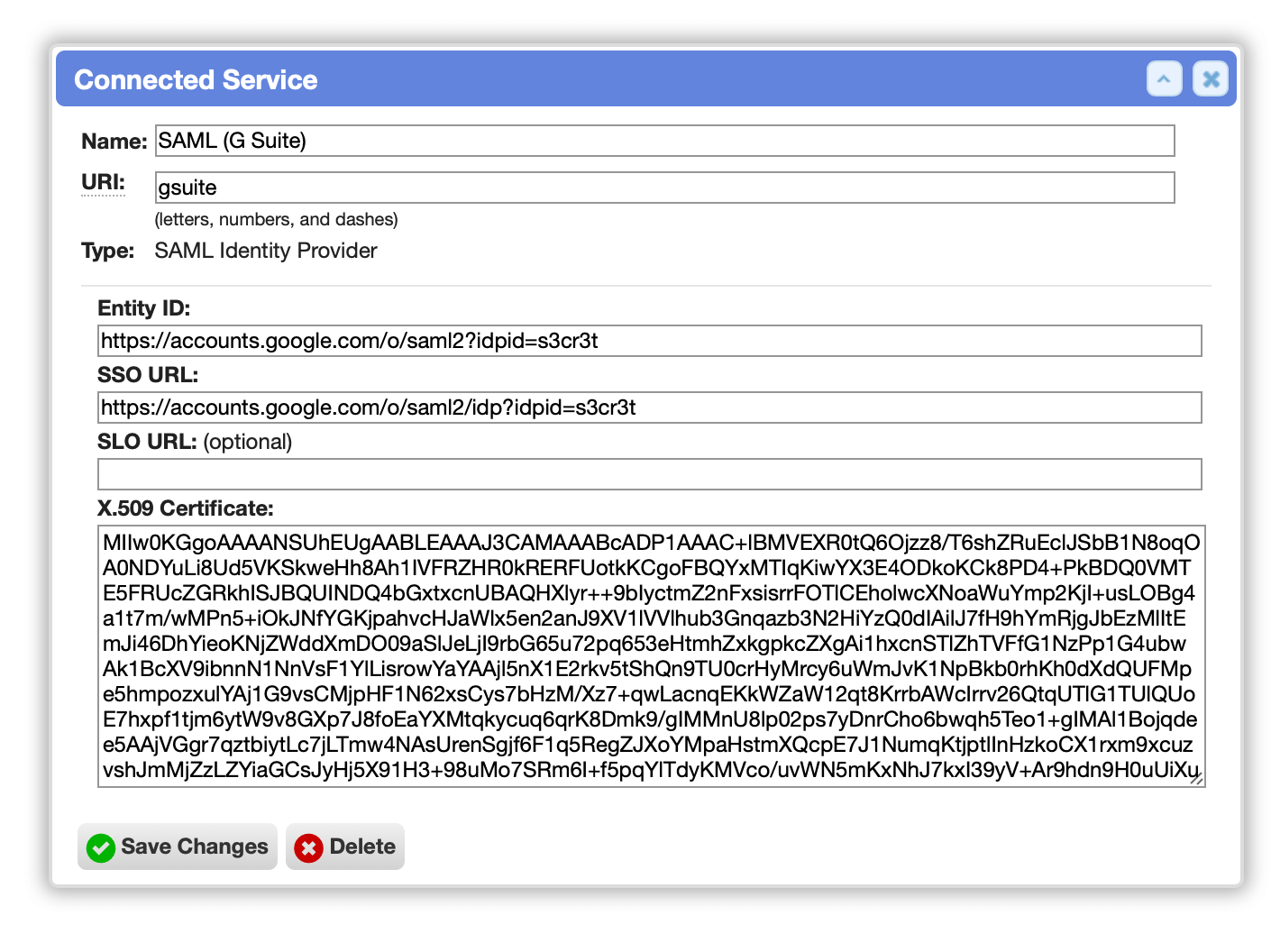 The improvements to connected services have made it much simpler to implement Single sign-on (SSO) functionality for authenticating worker logins.

This enables authentication from an existing identity provider (IdP) with SAML2, OpenID Connect, or LDAP.

New SSO providers can be added through connected services without requiring plugins.

SSO providers can now be configured from Setup » Security » Authentication.

These options are displayed as buttons on the login page above the email/password form, enabling a single-click login when a worker has an existing session at the identity provider (e.g. G Suite, Salesforce, AWS Cognito). 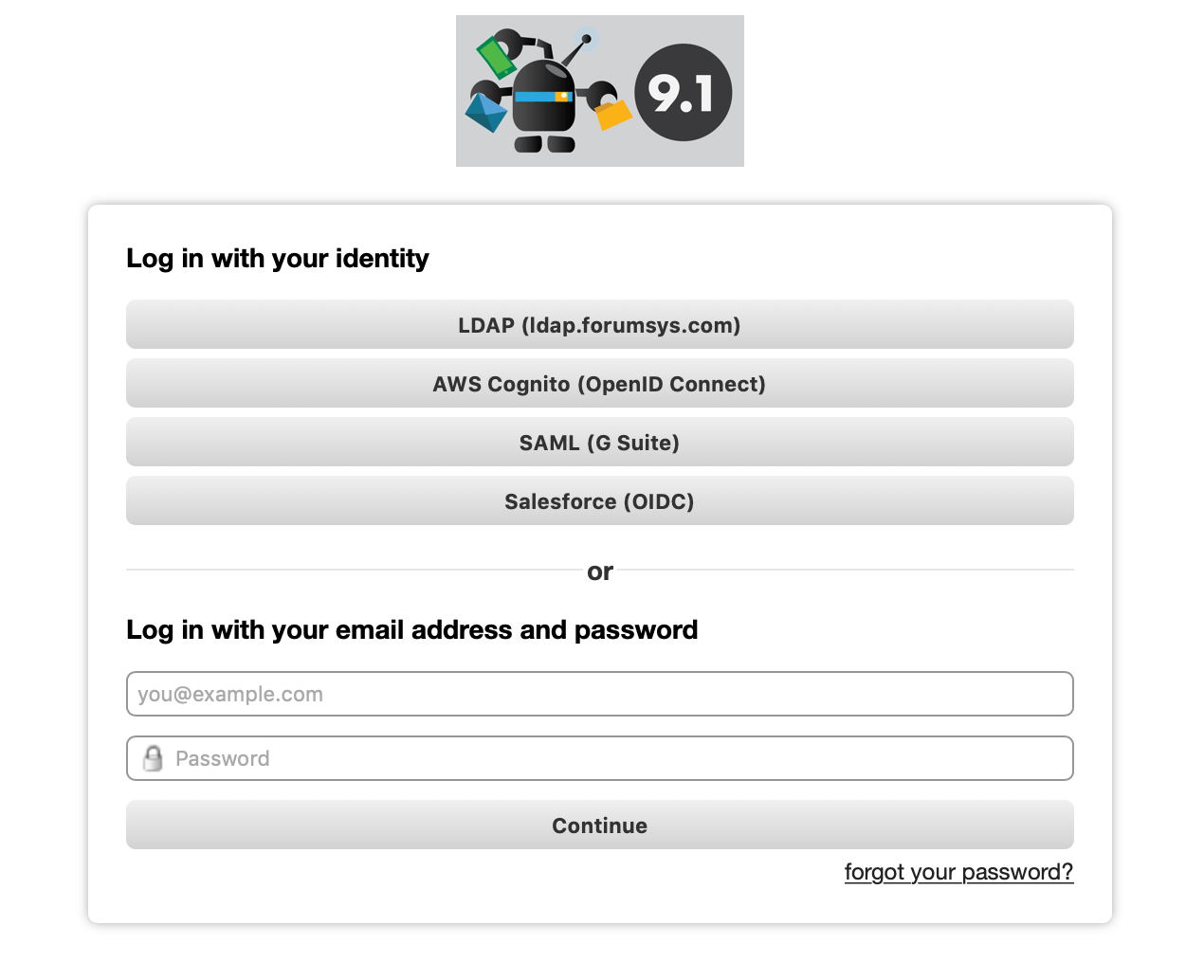 This change also makes it possible to implement auto-provisioning for new workers in a future update based on an existing corporate directory. This is particularly useful for environments with 100+ workers.

In the new process, a worker authenticates first (e.g. password, SSO, LDAP) and then is prompted for a one-time security code from an authorized device (like their mobile phone). This improves security by requiring a malicious party to know someone’s password as well as having physical access to one of their devices.

This also improves the user experience when using a password manager (e.g. 1Password), as the temporary security code is automatically copied to the clipboard after authenticating.

MFA may now be required or optional for each worker account. This can be quickly configured by admins by using the ‘bulk update’ feature on a worker worklist. 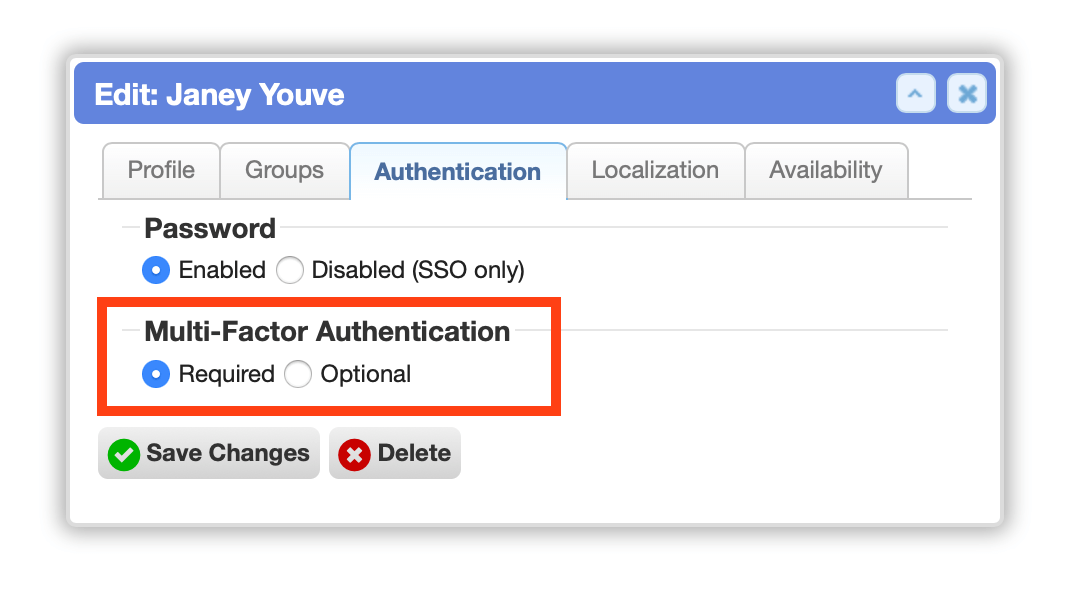 When MFA is optional, workers may enable/disable it from the Settings » Security tab on their profile.

If MFA is required and is not set up, a worker is prompted to configure it on their next login before proceeding. 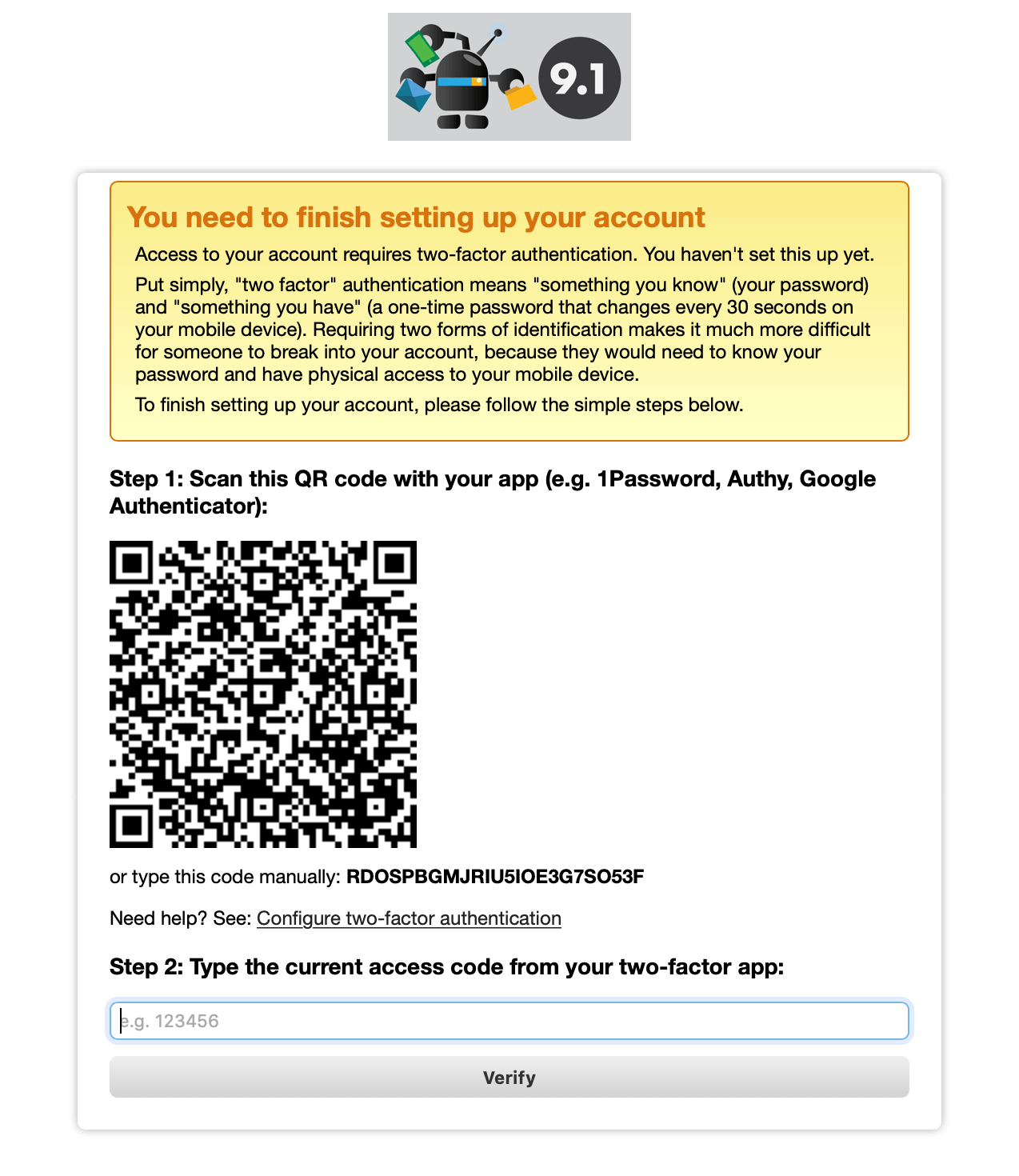 When using multi-factor authentication for worker logins, a worker can enable ‘Remember this device’ to avoid having to answer subsequent MFA challenges for a certain period.

This improves the usability of MFA for daily workers, which makes it more likely to be used. The challenge is still enforced for any unfamiliar devices.

This functionality can be enabled/disabled by admins in Setup » Security » Authentication. Admins can also configure the “remember” duration from 0-60 days. 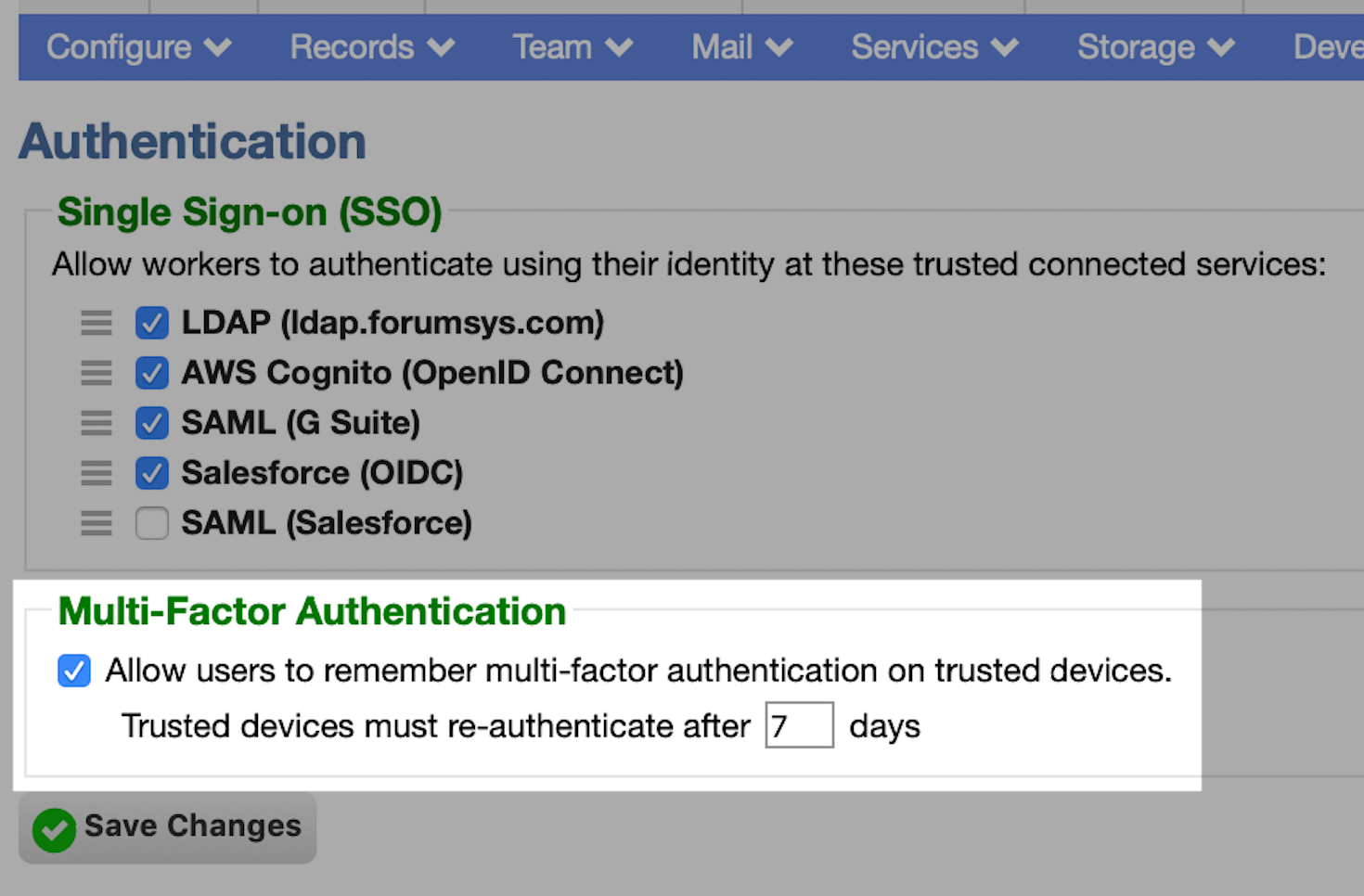 On worker records, password-based authentication can be disabled to force logins using a SSO (single sign-on) identity provider. This can be enabled per-worker. 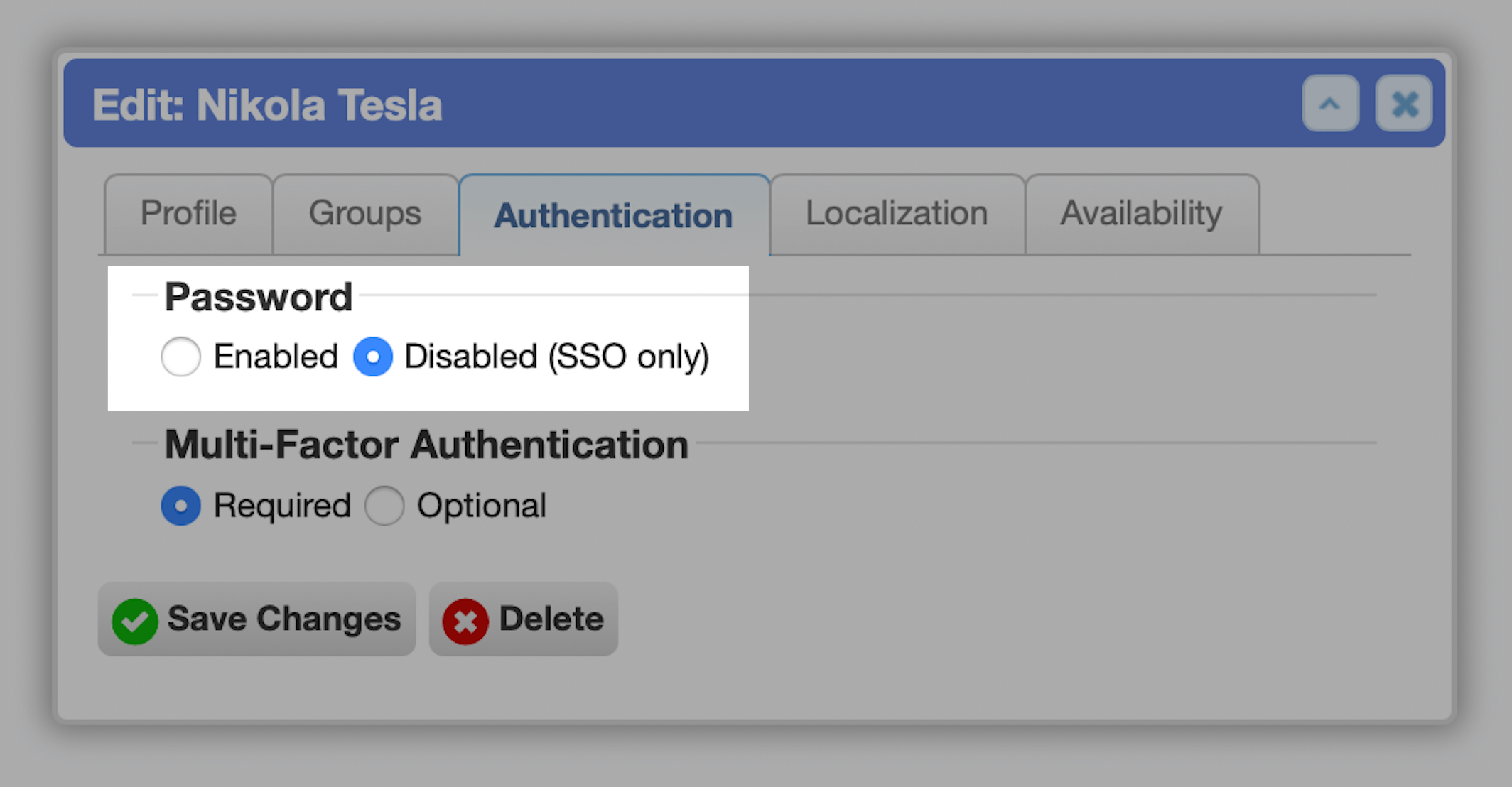 The initial /login page now prompts for email address and password in a single form again. 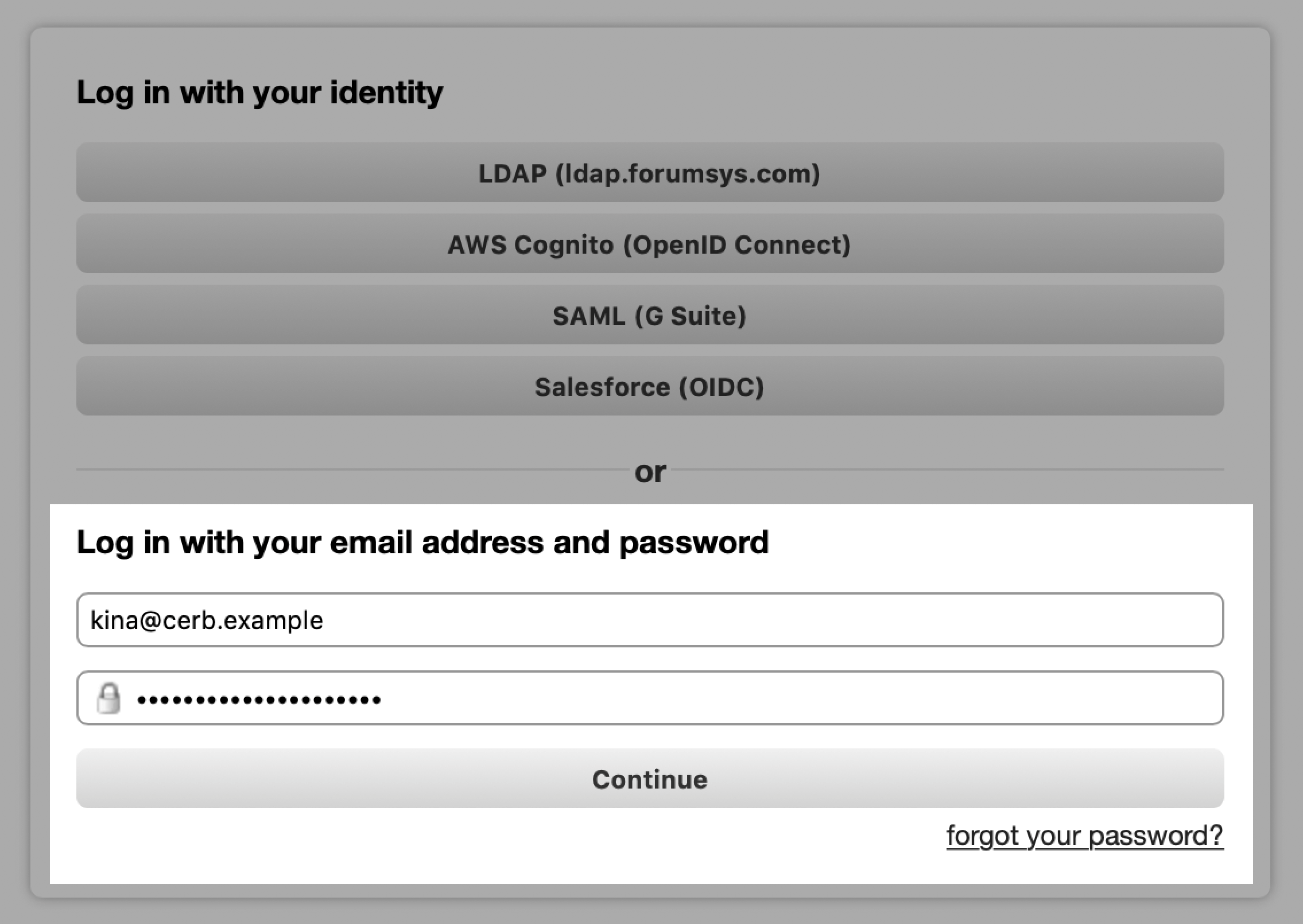 Previously, the email field was asked first in order to determine the appropriate authentication method per-worker. This is now better handled with single sign-on (SSO) functionality.

Additionally, this approach leaks less information about valid accounts to an attacker.

After a worker logs in, they are now redirected to their default page rather than their profile.

Worker passwords must now be at least 8 characters in length. Ideally they should be much longer, random, and in a password manager.

When creating a new worker account, or re-enabling password access on an existing worker, an invite URL is sent to their email address. The URL contains a long, time-limited token. When clicked, the link will prompt the worker to create a password.

If multi-factor authentication or security questions exist on their account they’ll be prompted to verify their identity first.

During a worker login, when recovering an account (i.e. forgot password), multi-factor authentication (MFA) is now required when enabled.

Without MFA, a worker’s secret questions are used to verify their identity instead.

If a worker forgets their password and loses their MFA device, an admin can disable and re-enable MFA on their account to reset it.

OAuth2 authentication in the API

The Cerb API can now be accessed using industry-standard OAuth2 Bearer tokens in the ‘Authorization:’ header rather than request signatures. [#310] This simplifies integrations and allows the use many OAuth-based client libraries and development/testing tools. The legacy request signatures are also still supported for backwards compatibility, but may be deprecated in a future update.

Admins can create new ‘OAuth App’ records to generate a client id/secret for third-party tools and services to use.

When a worker connects to their account from a third-party service, Cerb will first authenticate them, and then request consent for the app’s requested scopes (permissions).

Currently only the three-legged authorization_code grant type of OAuth2 is supported, but other grant types (e.g. client_credentials) will follow shortly.

When configuring OAuth2 Apps for use with the API, each app may define (in YAML) its own ‘scopes’ to control the available API endpoints. Additionally, each endpoint may include allowed verbs (e.g. GET/POST/PUT/DELETE). [#838]

This makes it easy to offer read-only scopes to applications that don’t need to modify data (e.g. knowledgebase search).

When creating credentials for a new OAuth App, a default scopes policy is provided. 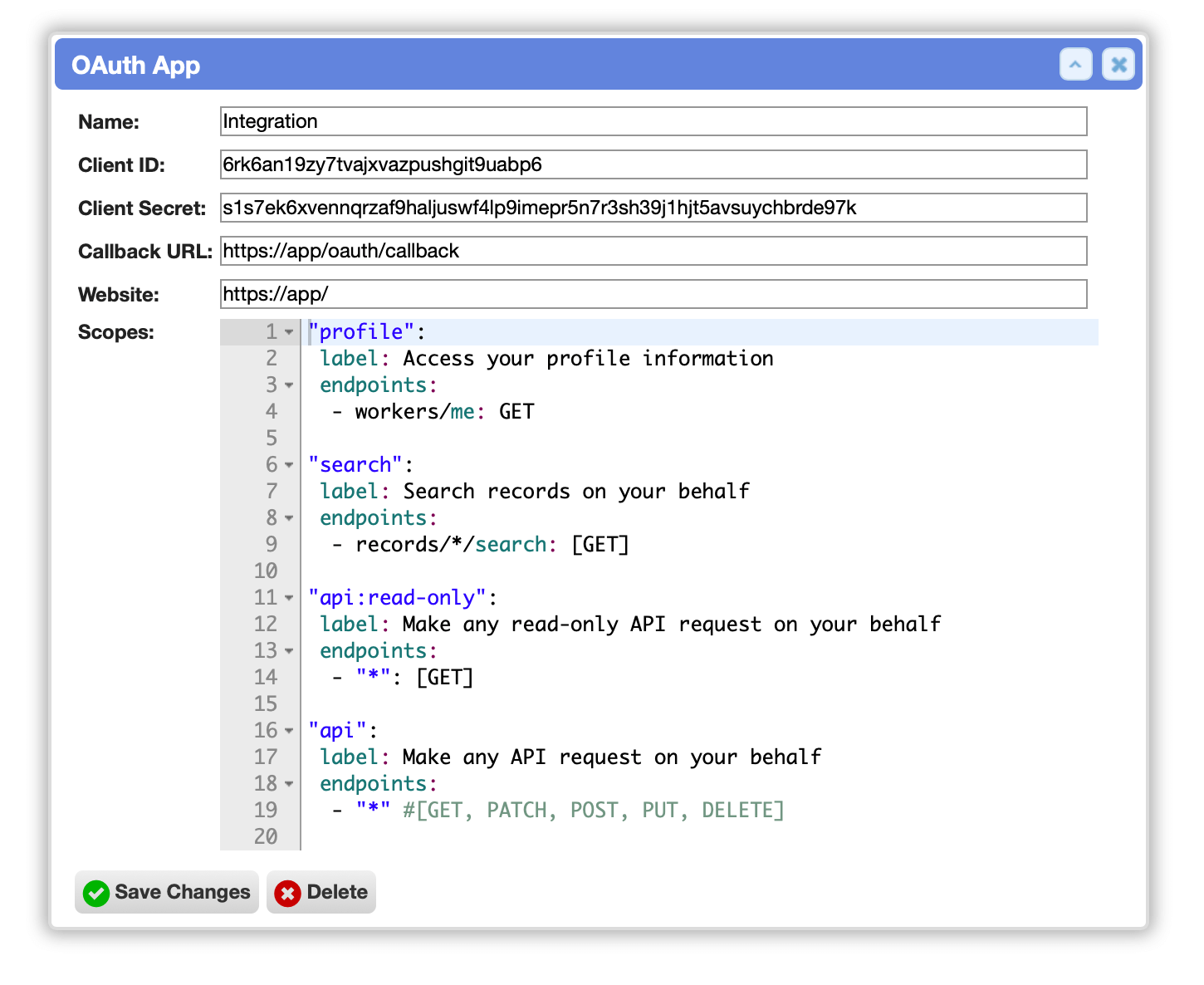 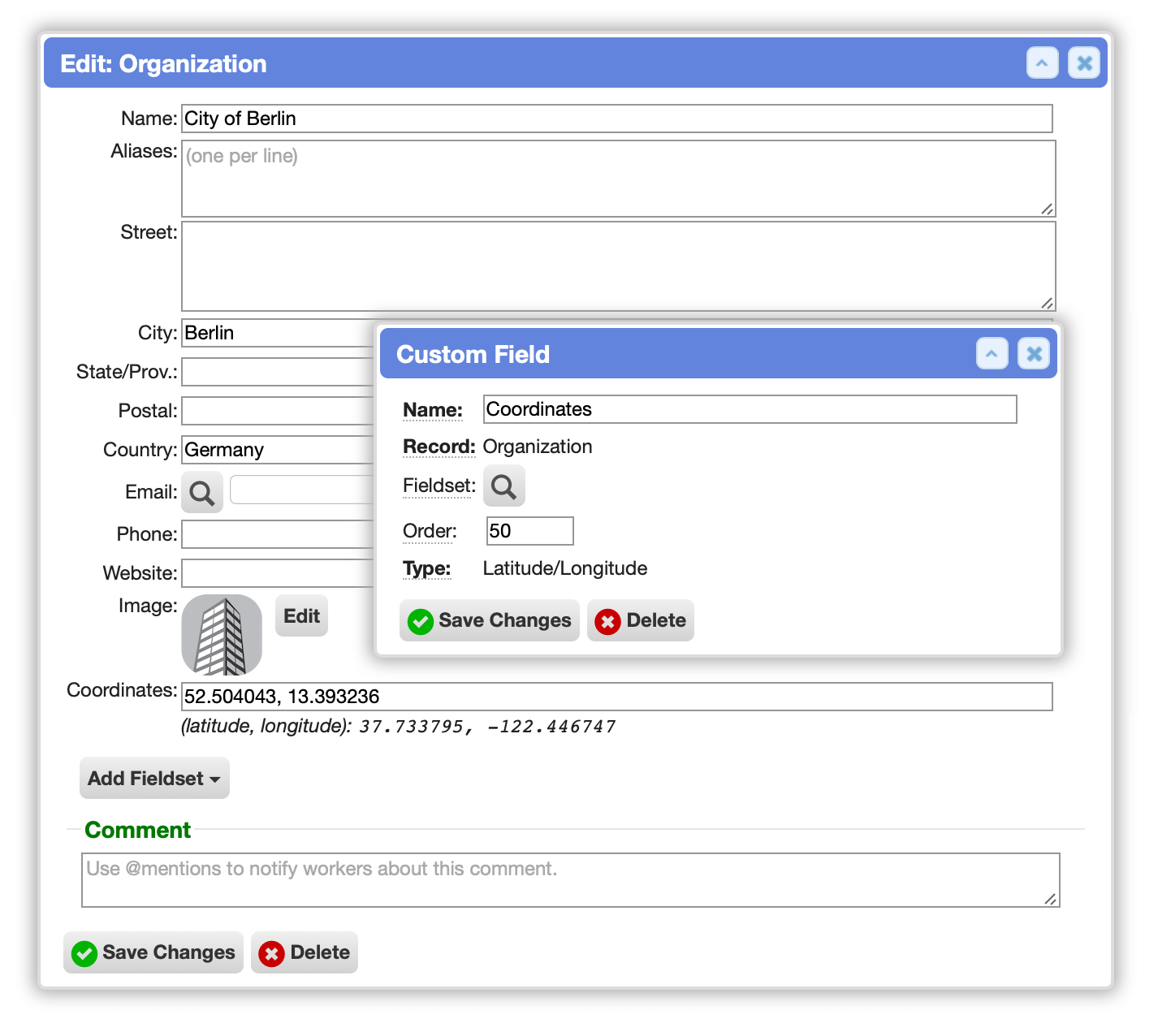 In this near future, this functionality will also support proximity searches, etc.

Added type:worklist.geo.points data queries for retrieving records based on a latitude/longitude field. This is used to plot data on map widgets. 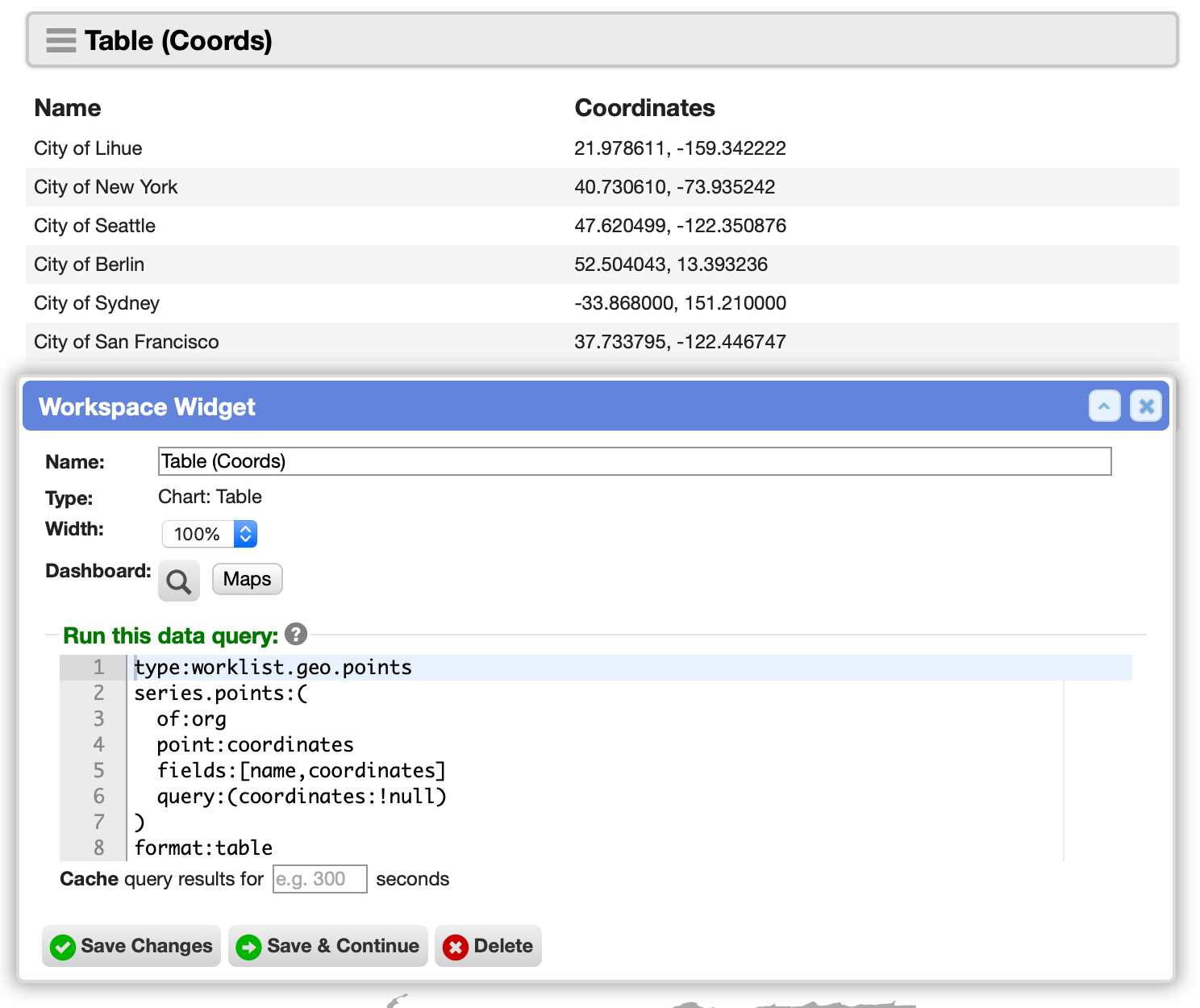 Added “Map: Geo Points” widgets to profile and workspace dashboards. These take a geo-based data query and plot coordinates on a map. 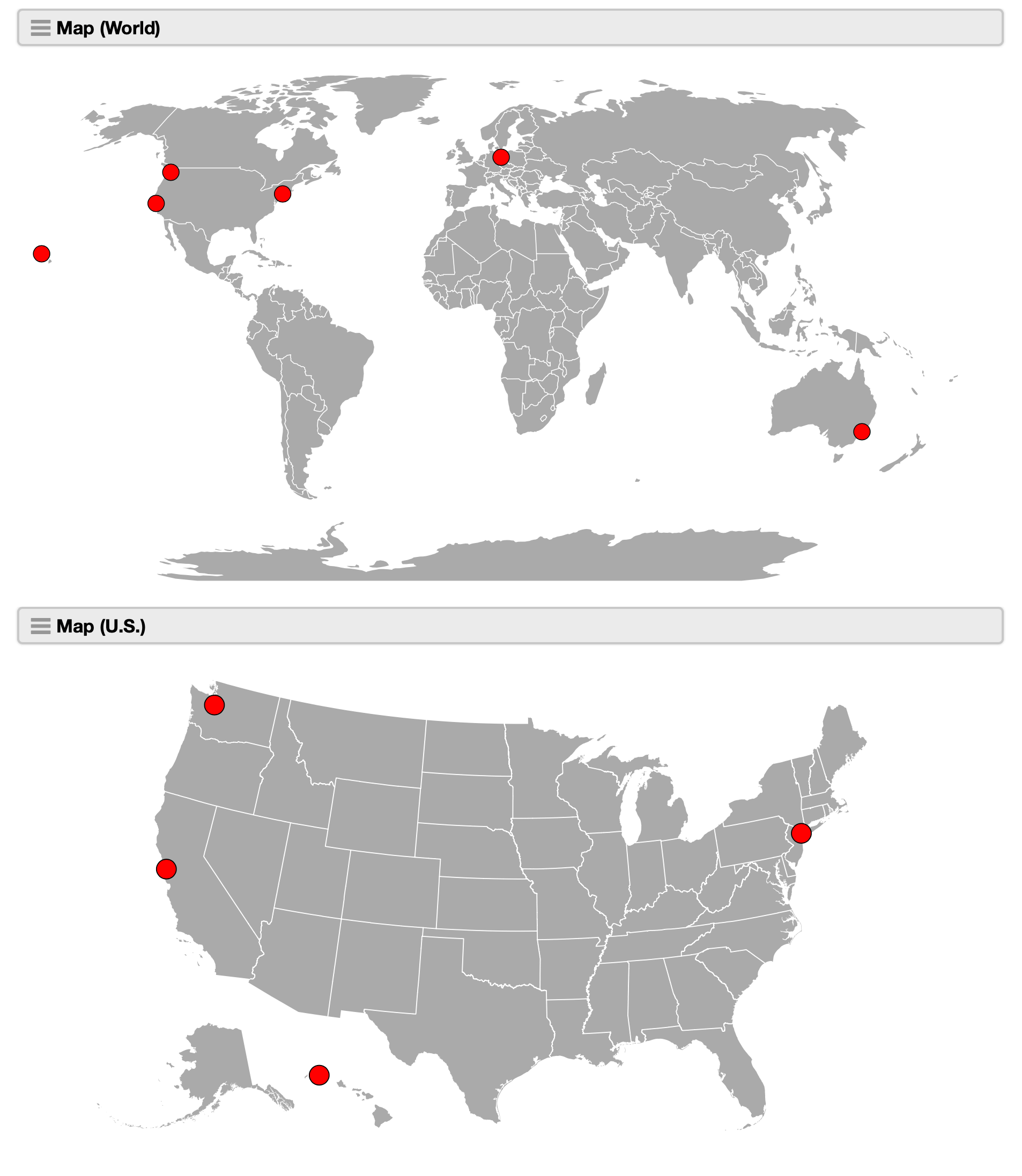 Currently these support U.S. (States) and World (Countries) variations, with more options on the way.

This improvement will allow us to implement a lot of custom field based feature requests while avoiding feature bloat.

On workspace dashboards, the ‘Prompted placeholders’ feature now uses YAML rather than JSON to describe the fields. This is more human-readable than JSON while still retaining structure. Existing dashboards have been automatically migrated to the new format. 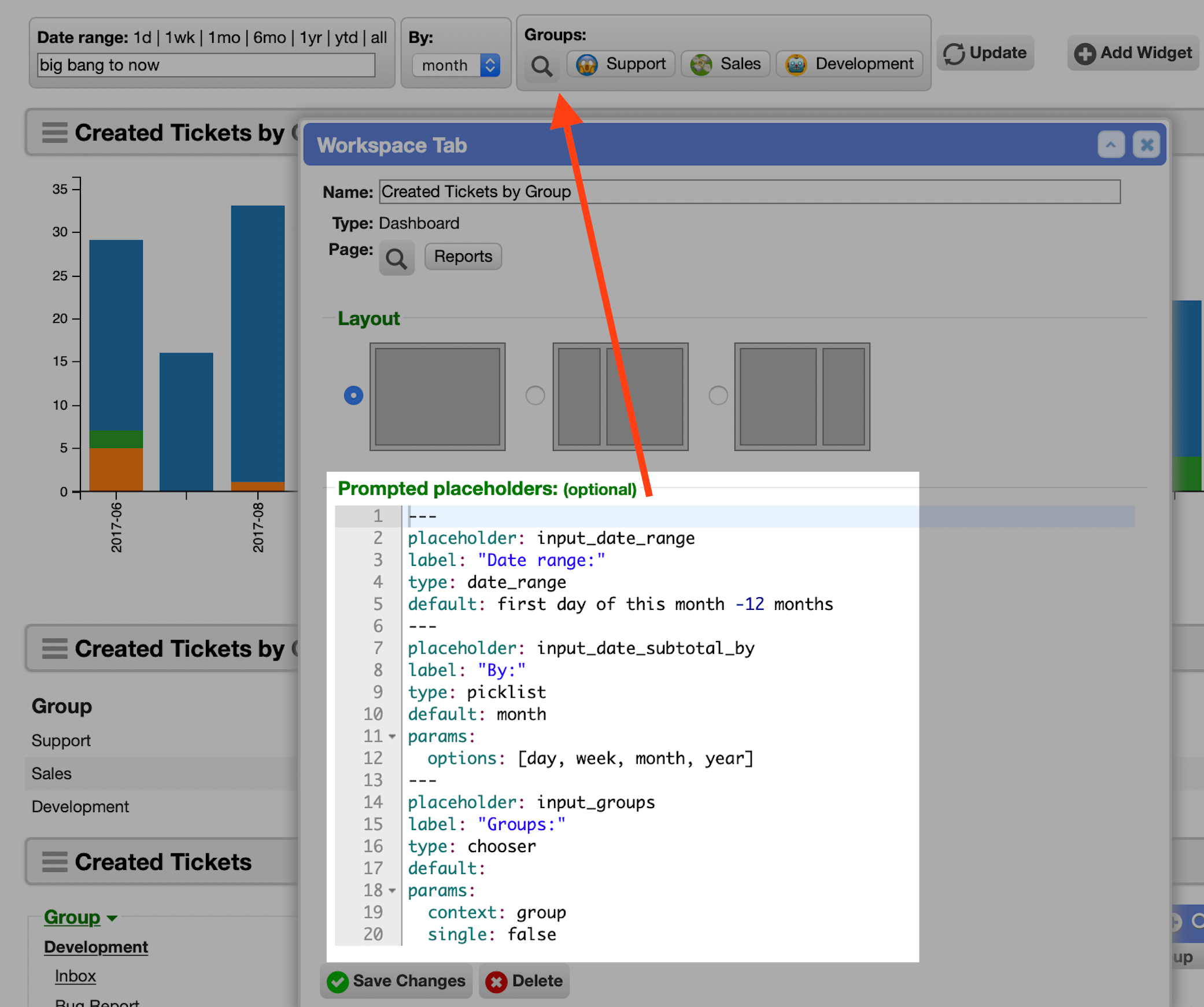 Profile tabs are now much easier to add and manage.

Previously this was handled with a chooser. It wasn’t immediately obvious how to add new tabs, or that they could be dragged into a specific order.

Now there’s simply a list of available tabs, with checkboxes and drag handles.

There’s also an obvious ‘Add’ button above the list to create new tabs.

Improved the usability of single-record searches

In bot behaviors, when using the records API to search, adding limit:1 to the search query directly returns a single record object rather than an array containing one record.

Previously an array was always returned, which tediously required a filter like {{results|first}} or a second placeholder.

In bot scripting, fixed an issue where lazy-loaded placeholders failed the defined and empty tests. This led to unexpected behavior on filters like |default.

Improved usability on the worker editor 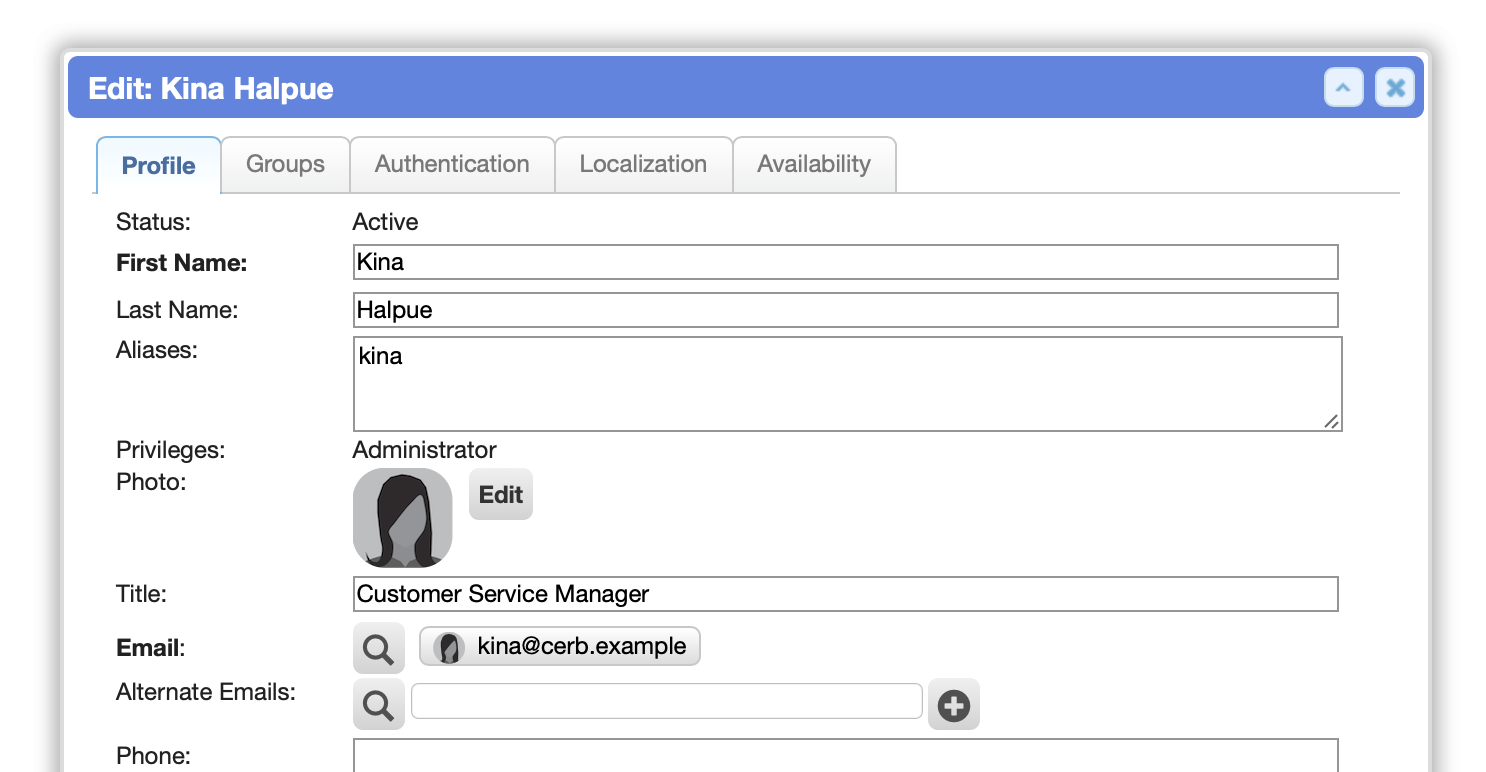 Using the records API, empty custom fieldsets can be added to ticket records with the fieldsets key. The value is either a comma-delimited string or an array of fieldset IDs.

This allows fieldsets to be attached to records before any values are set.

People use this to optimize common workflows; without requiring workers to manually add fieldsets for every new ticket. [#813]

This functionality will be expanded to all record types in a near future update.

Due to recent improvements in the platform, many plugins have become unnecessary and have been retired. Their data is automatically migrated to newer features.