You can think of a ticket as a brief project based on a specific question or issue.

The ticket’s profile page is a workspace that groups together email correspondence, comments, attachments, etc.

Each ticket functions like a private mailing list. Any number of contacts may be subscribed to a ticket conversation as participants, and they will receive a copy of all outgoing email messages from your team.

Tickets are sorted into buckets within groups.

The worker who is currently responsible for a ticket’s completion is its owner. 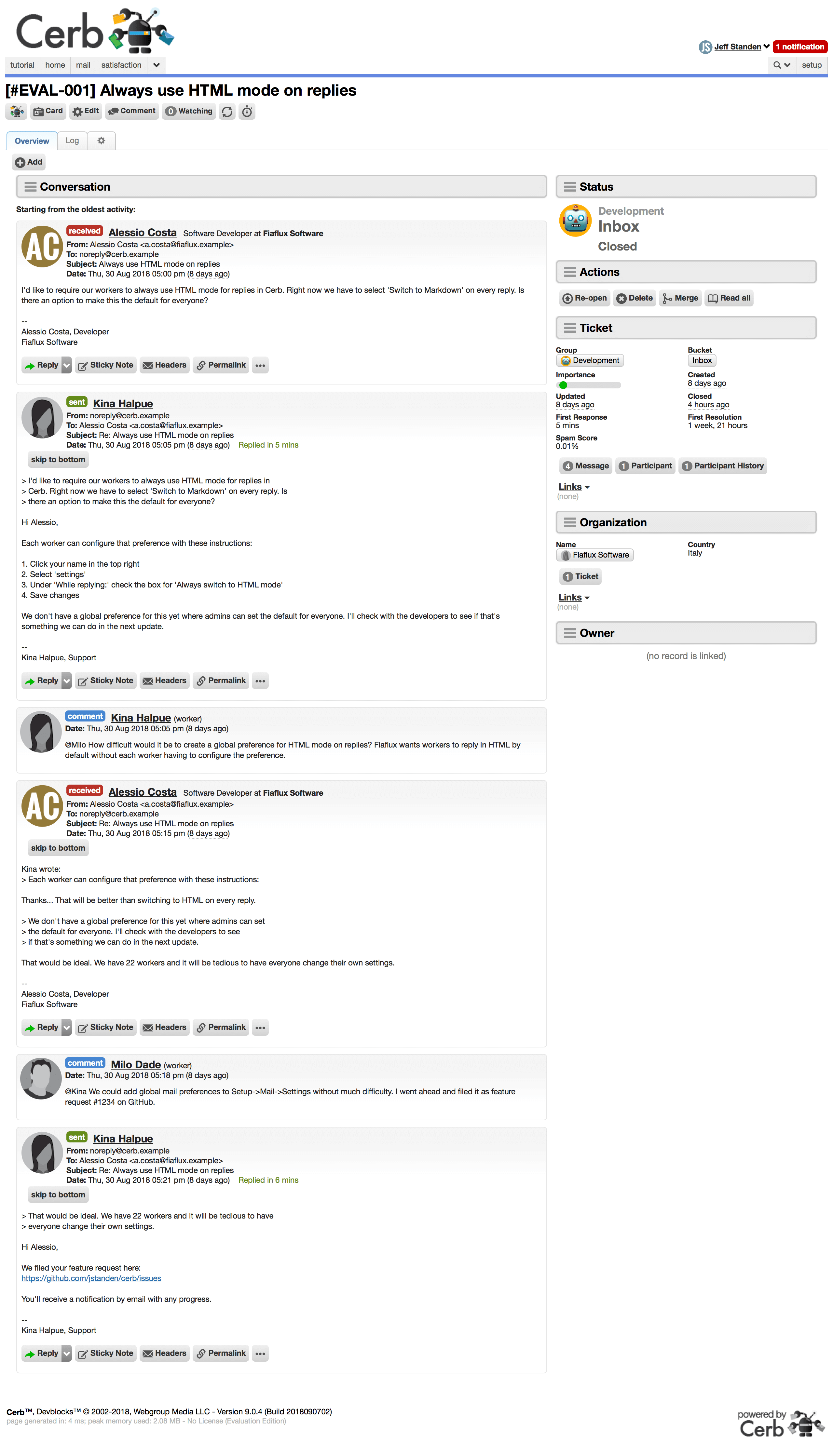 Every ticket is automatically assigned a unique, non-sequential reference mask, like RYS-07092-012.

The term “mask” refers to the fact that the randomized reference number (opposed to a numeric ID) doesn’t disclose information about your total number of tickets or your daily email volume.

A contact can provide the first three letters of the mask for quick lookups.

The status of a ticket is always one of the following:

You’ll most likely have at least one worklist dedicated to open tickets if you’re responsible for responding to inquiries from contacts.

When a ticket is changed to the waiting status you can also schedule a wait until date and time, at which point the conversation will automatically return to the open status. This keeps your inbox free of tickets that you can’t work on until a later date. It’s also a great way to schedule followups on sales or marketing messages.

If a contact adds a new message to a ticket that is waiting or closed it will automatically change back to the open status.

By default, when a ticket is deleted you will have 7 days from its last activity to change it to a different status before it’s removed permanently. This is called the “undo window”.

Ticket priority is determined by the importance field. You’ll encounter importance as a simple slider where you can nudge it up or down as needed.

The importance field can also be automatically adjusted by bots in response to service level committments, escalations, etc.

When a worker responds to a specific client message, Cerb also records the response time on the worker’s message. This encourages workers to respond quickly, even if it’s only to say, “Let me check on that and get right back to you”.

Cerb performs a simple statistical analysis of the contents of the first message on new tickets to predict whether a message is spam or not.

The predicted probability of being spam is stored as a spam score on the ticket.

By itself, this prediction has no effect on tickets. However, the computed score can be used by bots and workers to filter mail when desirable.

The spam predictions improve and adapt over time through training. When a worker replies to a client message, Cerb learns to be more approving of similar messages in the future.

When workers click the Report spam button on a ticket, Cerb becomes more critical of similar messages in the future.

Drafts automatically save the current progress of a worker’s message before they send it. This allows a composed message to be resumed at a later date, and it provides a backup (e.g. the browser crashes or otherwise unintentionally closes).

Drafts are displayed in a ticket’s conversation timeline, which instantly lets other workers know that a response is being sent so they can move on to a different ticket. This prevents duplication of effort.

Similarly, a trainee can ask a supervisor to review their draft before they send a message to a client.

Related tickets from the same participants can be merged together into a single ticket, which combines all of the messages and comments.

Conversely, if a ticket conversation diverges into multiple topics that would be better handled by other groups or workers, one or more messages can be split off into new tickets.